Egyptian revolution is over, Morsi sentenced to death 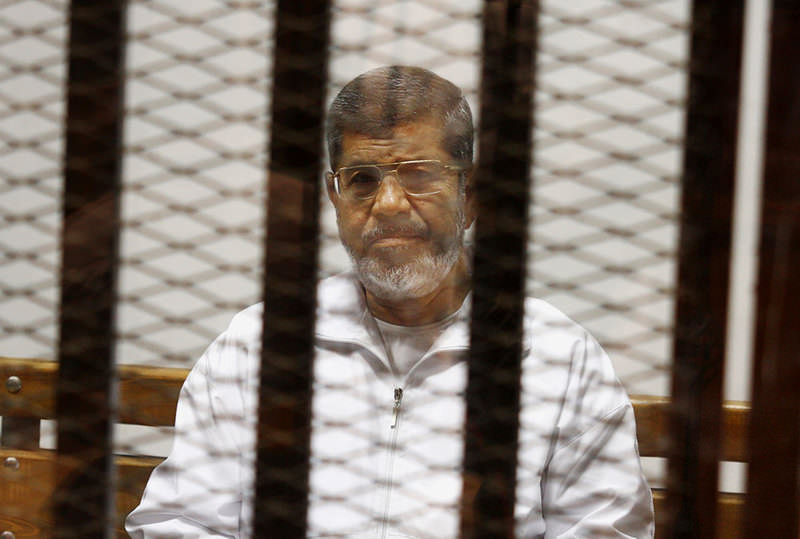 The dream that started in 2011 for a democratic Egypt, where people could elect their president under the protection of law, came to an end after Morsi, along with dozens of other defendants, was sentenced to death

An Egyptian court on Saturday sentenced Egypt's first democratically elected president, Mohammed Morsi, who was ousted after a bloody military coup headed by incumbent President Abdel-Fattah el-Sissi, to death along with more than a hundred people over a mass prison break during the incidents in 2011 that ousted former autocratic President Hosni Mubarak who ruled Egypt for 30 years. The sentence seems to bring the so-called Egyptian revolution to an end as el-Sissi has started ruling the country in a way indistinguishable from former autocratic leaders such as Gamal Abdel Nasser, Anwar Sadat and Mubarak. The prisons are full of dissidents, regardless of ideology, and it has become impossible to criticize el-Sissi's policies publicly.

The dream of a democratic Egypt started after former Tunisian President Zine El Abidine ben Ali was deposed from his post after a popular uprising as millions of Egyptians also gathered in Tahrir Square (Liberation Square) in Cairo. People were determined to end the decades-long autocracy in one of the wealthiest but at the same time poorest and most corrupt countries in the region. Islamists, leftists, conservatives and almost every political faction were on the streets as well as ordinary people who were demanding a better future for themselves and their children. When Mubarak was ousted, Egyptians had one of the most joyful days in their history.

Members of the Muslim Brotherhood were also chanting slogans for a brighter future. The Muslim Brotherhood was the largest political movement in Egypt and was delivering aid, social services and education facilities across the country with a moderate Islamist ideology, seeking to end poverty, impoverishment, foreign intervention, unemployment, social problems and corruption.

Since the first day of its establishment in 1928 by Hasan al-Benna, who was killed in 1949, the group never resorted to violence but preferred to remain in legal politics and separated itself from radical groups that adopted the Salafi/Wahhabi understanding of Islam like al-Qaeda. The Muslim Brotherhood was familiar with politics as it was struggling to grab seats in parliament in the Mubarak era. The group entered parliamentary elections and presidential elections. The popularity, reliability and fact-based words brought Muslim Brotherhood-supported Mohammad Morsi to power after receiving more than 50 percent of the votes. Morsi became the first democratically elected president of the country.
Egypt was on its way to becoming a democratic country where the president and members of the parliament were elected freely. However, Morsi's rule did not last long, and Gulf-supported el-Sissi changed the game and the fate of Egypt.

On July 2011, before Morsi's election and the bloody military coup happened, I visited Egypt to meet several political parties, non-governmental organizations, academics, journalists and think tanks. There was nobody who was not hopeful, and there was nobody, including Muslim Brotherhood members, who were expecting a coup by the military in the coming years. However, Morsi was not welcomed by the U.S., Israel or oil-rich Gulf countries. El-Sissi, who was serving as the Chief of Armed Forces, enjoyed the unconditional support of the Gulf and silence of the world powers, including the EU, the U.S. and Russia while ousting Morsi. Turkey was the only country that rejected el-Sissi rule. U.S. Secretary of State John Kerry even said that Egyptian army was restoring democracy through overthrowing the democratically elected president. Gulf countries, especially Saudi Arabia, which was afraid of seeing a similar picture in its country in case of a popular uprising demanding democracy, welcomed the coup as well.

Following the death sentence verdict, the U.S. and the U.N. expressed their concerns by favoring a moderate approach. A U.S. State Department official on Sunday said, "We have consistently spoken out against the practice of mass trials and sentences, which are conducted in a manner that is inconsistent with Egypt's international obligations and the rule of law." The official noted that they were preliminary sentences and added, "We continue to stress the need for due process and individualized judicial processes for all Egyptians in the interests of justice." Ban Ki-Moon also urged authorities to avoid steps that could undermine peace, stability and the rule of law in the region, his office told Anadolu Agency in a statement. "He reaffirms the United Nations' position against capital punishment," the statement added.

After el-Sissi took power, the international community voiced its concern weakly against the human rights violations, mass death sentences, arbitrary detentions and the suppression of all opposition groups by the el-Sissi rule, despite the repeated warnings of rights groups. Moreover, the U.S. did not condemn the mass killing of people in Egypt as happened in Rabaa Square in 2013. The systematic and widespread killing of at least 817 demonstrators by Egyptian security forces in July and August 2013 probably amounts to crimes against humanity, Human Rights Watch (HRW) said in a report, released last August. "In Rabaa Square, Egyptian security forces carried out one of the world's largest killings of demonstrators in a single day in recent history," said Kenneth Roth, executive director of HRW. The Cairo administration shook the world frequently last year as Egyptian courts sentenced hundreds of people to death and to life in prison.

A recent report by the Egyptian Center for Economic and Social Rights, a local NGO, said that more than 41,000 Egyptians had been subject to prosecution since Morsi's ouster. "The death sentences are yet another example of the bias of the Egyptian criminal justice system. These verdicts and sentences must be quashed and all of those convicted should be given a trial that meets international standards of fairness and excludes the death penalty," said Hassiba Hadj Sahraoui, Deputy Middle East and North Africa Program Director at Amnesty International. "The death penalty is a cruel and inhumane punishment in all circumstances. To impose death when there are serious doubts hanging over the fairness of the trial is outrageous and flouts international law," she added. Egypt announced at least 509 death sentences last year. Amnesty International also expressed concern about countries that resumed the practice of executions.

Despite the voiced concerns over trials, the Egyptian authorities claim that everything was proper. In a statement about the sentencing, Amr Darrag, a Muslim Brotherhood leader who was a cabinet minister under Morsi, said it was "one of the darkest days of Egyptian history" and a symbol "of the dark shadow of authoritarianism that is now cast back over Egypt." Mona El-Ghobashy, a visiting scholar at the Institute for Religion, Culture and Public Life at Columbia University, was quoted by the New York Times as saying: "The self-appointed permanent guardians of the state, judiciary and military are messaging that the revolution's political results (free elections, civilian president, right to protest) were unnatural, unreal and unsustainable. They're saying to Egyptians: 'This whole business of democracy and choosing your rulers is a fantasy. That's not the way power works here.' In light of the politically charged environment within which the Morsi prosecutions are taking place, the perception by some may be that these trials are more about political retaliation than bona fide criminal activity," she added.

It is unsurprising that the verdict aimed to strengthen el-Sissi rule and ruin the Muslim Brotherhood totally. It is not known whether the defendant will be executed. But the regime sentenced even a dead Palestinian to death and another one who is in an Israeli prison. Hamas spokesman Sami Abu-Zuhri said in a statement on Saturday that the verdict was based on "false information," saying that some of those Hamas members who were convicted in absentia, including "martyrs Tayseer Abu-Senema and Hossam El-Sanea," were dead at the time the offences were carried out. Abu-Zuhri said that others convicted have been in the "prisons of the occupation (Israel) for years, such as Hassan Salama, who has been imprisoned for 19 years."

Morsi and other defendants were referred to the Grand Mufti, Egypt's top religious authority, to consider the death penalties against them on espionage charges. The court set June 2 to deliver verdicts against ousted President Mohamed Morsi and 34 other defendants in the same trial. The opinion of the mufti is not binding on the court, but Egyptian law makes it necessary for judges to seek a religious point of view on any death sentence.