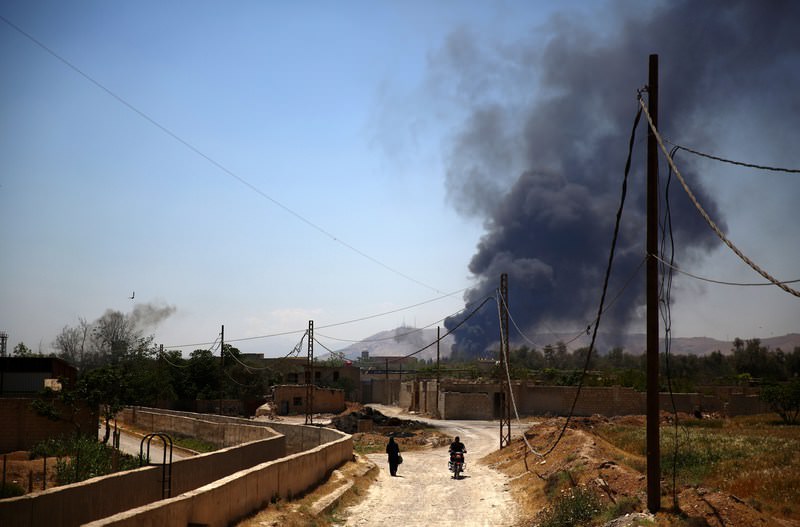 U.S. commandos mounted a rare raid into eastern Syria overnight, killing a senior Islamic State commander in a firefight, capturing his wife and rescuing a Yazidi woman held as a slave (AP Photo)
by Daily Sabah May 16, 2015 12:00 am
The U.S. troops has conducted a ground operation on Friday night in eastern Syria and killed a senior ISIS (The self-proclaimed Islamic State of Iraq and al-Sham) group leader named Abu Sayyaf, a.k.a. Mohammed Shalabi.

This was the first ground operation officially acknowledged by the U.S. government in Syrian borders.

Announcing the death of Abu Sayyaf, Secretary of Defense Ash Carter added that his wife and suspected member of ISIS Umm Sayyaf was captured in the raid and was taken to Iraq for interrogation.

According to the information from the US National Security Council, President Barack Obama ordered the overnight raid. The US Defense officials also reported that no US military were killed or injured in the operation.

Meanwhile, ISIS militants have reportedly withdrawn from government headquarters in Ramadi, Iraq, mayor and tribal leader said, according to Reuters.

A U.S. defense official said the leader killed was a Tunisian national designated by ISIS as the organization's "emir of oil and gas." The official said Abu Sayyaf had "associations" with Abu Bakr al-Baghdadi, the leader of the Islamic State group, and was thought to have knowledge about a wide range of IS operations, Associated Press reported.

The US administration has opposed against the Assad regime since the start of the civil war in Syria. But Washington believes that the crisis can only be solved with a political intervention and regime change.

Accordingly, the US has changed its tune on the Syrian regime change as ISIS has become a major threat.

Having been providing support for the Free Syrian Army and Democratic Union Party, there has been many US-led airstrikes targeting the militants positions since September last year.