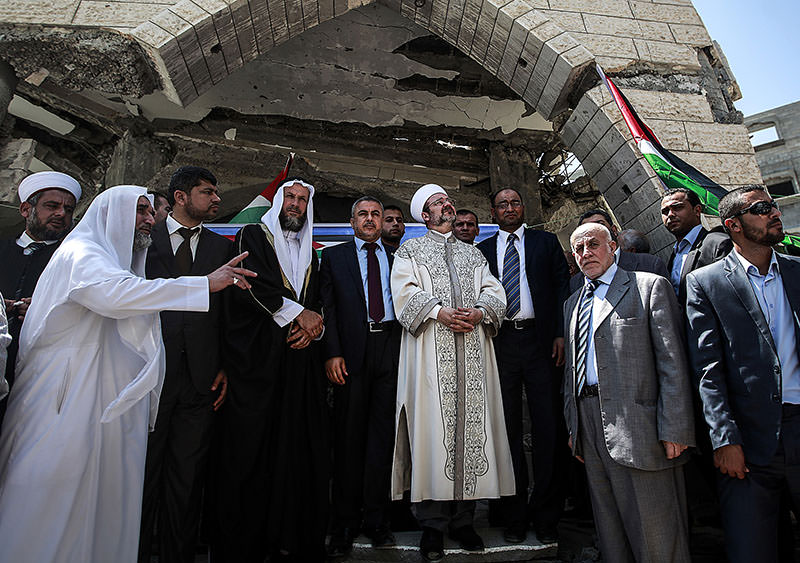 | AA Photo
by Anadolu Agency May 17, 2015 12:00 am
Israel has violated human rights of Palestinians and used internationally banned weapons against civilians in Gaza, Turkey's head of religious affairs said, during his first visit to the Gaza Strip on Sunday.

Referring to Israeli government's eight-year blockade of the Gaza Strip, Görmez said that the people of Gaza had free minds and free hearts despite the daily horrors they faced.

He said that the Israeli army had used internationally banned weapons in its anti-Palestinian deadly operations in the Gaza Strip.

"Israel used internationally banned weapons and violated religious and human rights [of Palestinians]. Israel must be prosecuted," he added.

Görmez also met with Ismail Haniyeh, deputy chairman of the Hamas political bureau, in during his visit in Gaza. Haniyeh praised Turkey's assistance to Palestinians, which he said was an indication of the "reliable and sacred" bond between the two sides.

"Gaza in particular and Palestine in general praises Turkey's support in all domains," the senior Hamas leader said.

On July 8, 2014, Israel launched its "Operation Protective Edge" offensive in the Gaza Strip that left more than 2,000 people, most of them civilians, dead. The Israeli bombardment had also left around 11,855 housing units destroyed or severely damaged, and at least 425,000 people were displaced, according to an August 2014 UN report.
Last Update: May 17, 2015 7:32 pm
RELATED TOPICS