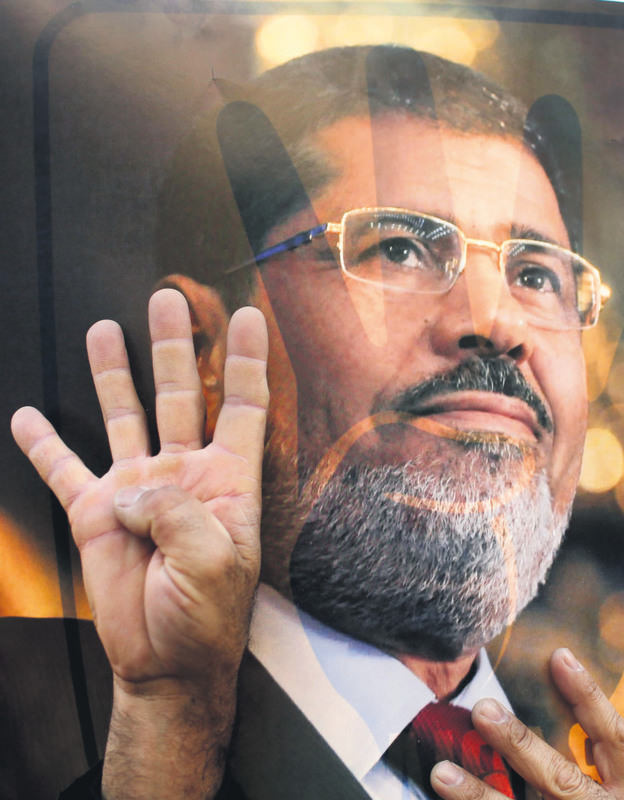 A protester in Cairo in front of a picture of Morsi makes the Rabaa sign (four) that became popular after hundreds of pro-Morsi protesters were massacred in Cairo's Rabaa Square.
by Yusuf Selman İnanç May 18, 2015 12:00 am

The Palestinian Authority has refused to comment on the verdict that sentenced ousted Egyptian President Morsi to death while Gulf countries including Saudi Arabia, eager supporters of the coup, have not issued statement

Turkey, the U.S., the U.N. and the European Union condemned the court verdict that sentenced Egypt's first democratically elected President Mohammed Morsi to death along with other more than a hundred defendants over a mass jail break in 2011 during the ouster of former autocrat President Hosni Mubarak. However, Palestinian Authority which claims to be suffering from Israeli aggression which was slammed by Egypt under the presidency of Morsi did not make any word on the verdict but said the Fatah movement refused to intervene Egypt's domestic issues. Fatah leader, Yahya Rabah, described the Egyptian judiciary as "ancient and great", adding that "any Palestinian politician cannot intervene or comment on an Egyptian judicial decision, and it is essential to take advantage of the wide range of judiciary opportunities for appealing against the death penalties against Palestinian prisoners and martyrs."

Saudi Arabia and other tiny Gulf countries remained silent as they did before over mass human right violations in Egypt under the rule of the coup leader and the current President Abdel Fattah el-Sissi as the countries had supported the coup through pledging billions of dollars aid. The Gulf, especially Saudi Arabia was afraid of a similar popular uprising in their own countries that may bring their dynasties to an end and replace with a moderate Islamist government like the Muslim Brotherhood of which Morsi was member.

After Mohammad Morsi was ousted, the United Arab Emirates (UAE) made mass economic aid to Egypt. UAE gave $6 billion and more than Dh22 billion in cash and interest-free loans to guarantee fuel supplies and fund projects in health care, education, food, housing and transport. Last year the UAE contractor Arabtec began talks with the Egyptian officials to build a million low-cost homes, one of Egypt's most pressing needs. Egypt in our Hearts, a campaign established by Emirates Red Crescent in mid-July 2013 on the orders of the President, Sheikh Khalifa, has provided aid in the form of food, medicines and educational assistance to thousands of needy Egyptians. Last December, UAE also approved that 78 health centers, 25 grain silos, railway crossings, 1,488 housing units and hundreds of schools will be built in a few years. The project coordination office for UAE development projects has begun a campaign that aims to train at least 100.000 Egyptians to have a job. According to office, 25.000 Egyptians have been trained so far and 10.000 of them have found job.

Although el-Sissi claims to better Egypt's economy through increasing alliance with his supporters from the Gulf, his presidency is controversial since the coup, he headed, was marked as one of Egypt's bloodiest period. Morsi was accused of deteriorating the Egyptian economy, aiding Hamas, spying for certain countries and polarizing society. People who were against Morsi and the Muslim Brotherhood went to the streets at the end of June to protest the Islamist government. After the protests started, the army sided with the protesters and gave an ultimatum to Morsi that said he had to resign in two days. Morsi stressed the fact that he was elected and only another election could remove him. The army did accept Morsi's argument of being elected. While the tension escalated in Cairo among different factions and the army, the people on the streets also expressed different demands. The sit-in protests to show solidarity with Morsi started even before the anti-Morsi protests. Despite the support of the masses the army overthrew Morsi and his cabinet, violating the constitution and universal democratic values.

Morsi and many other prominent political figures that were also either members of the Muslim Brotherhood or related to it were arrested. Pro-Morsi and pro-democracy protesters did not leave the streets. They chanted slogans against Sissi and the coup. Sissi claimed that the protesters were threating national security while making a call to his supporters to go to Tahrir Square. Sissi finally gave the order to clear Rabaa Square and at least 817 demonstrators were killed by Egyptian security forces. Also thousands of people were arrested and tortured.

Gulf countries except Qatar have eagerly supported Sissi as they considered Muslim Brotherhood rule as a threat to their dynasty.

Qatar had backed Egypt's first democratically elected president, Morsi, who was ousted after the bloody military coup headed by current president, el-Sissi. Qatar, along with Turkey, had been the only country that opposed the coup and el-Sissi's rule. Saudi Arabia, the UAE and Bahrain had withdrawn their ambassadors from Qatar last March due to Qatari support for Morsi and the Muslim Brotherhood, which was labeled a terrorist group by the three Gulf countries and the military-backed Egyptian government. The three states agreed to return their diplomats last month, seeking to patch up the schism between the Arab world's wealthiest countries, which has ramifications across the region, and was a signal of reconciliation among the countries.

On January, Qatari and Egyptian officials made steps toward solving the political crisis between the two countries that emerged after the coup. The court decision seems to be a fruit of the reconciliation process. There were a few reasons that caused the eruption of the political crisis. Firstly, Qatar had been supporting the Muslim Brotherhood by accommodating some of its members in Doha because they would have been tried and executed in Egypt if they returned. Secondly, Yusuf al-Qaradawi, a prominent Doha-based Islamic scholar, who was supported by the Muslim Brotherhood and Morsi, denounced the Saudi-backed el-Sissi rule through targeting the king of Saudi Arabia directly. Saudi Arabia's struggles resulted in the release of a warning of arrest for Qaradawi by Interpol. Thirdly, oil-rich Qatar, which has entered several economic sectors, attempted to isolate itself from the economic benefits of the Gulf region under the leadership of Saudi Arabia. Fourthly, except for Turkey, no other international or local actor in the region, like the U.S., Israel and Jordan, sided with Morsi or challenged the coup. A tiny country, Qatar faced opposition due to its policy on Egypt, especially from the other Gulf countries. Saudi Arabia, the UAE and Bahrain had withdrawn their ambassadors from Qatar last March due to Qatari support for Morsi and the Muslim Brotherhood, which was labeled a terrorist group by the three Gulf countries and the military-backed Egyptian government.
Last Update: May 19, 2015 5:07 pm
RELATED TOPICS