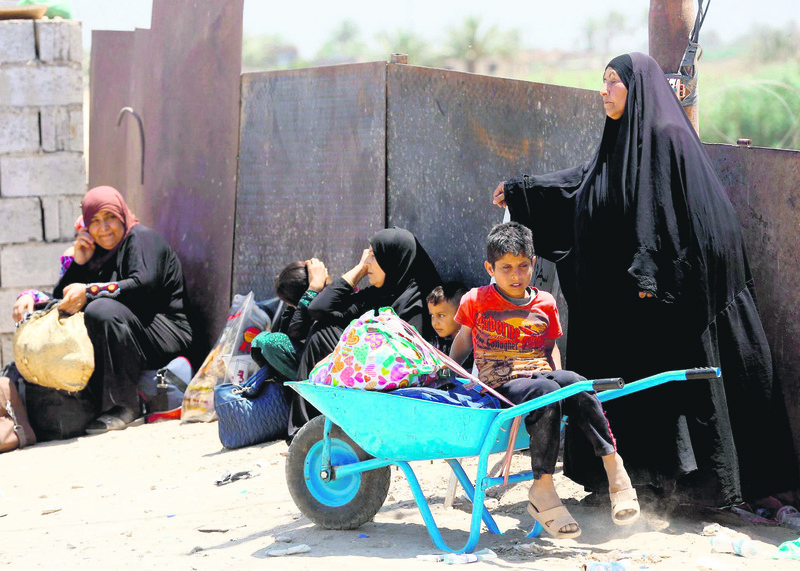 Iran-backed Shiite militias are readying to launch an assault after ISIS militants captured the strategic city of Ramadi in Iraq. Thousands of residents have been escaping due to fear of both ISIS and the militias

The Islamic State of Iraq and al-Sham (ISIS) launched an attack on Anbar province over the weekend and captured the city of Ramadi, which can be used as a base to reach the capital Baghdad. The Iraqi army, backed by the U.S. in the air and Iran-backed Shiite militias on the ground had launched an operation on ISIS and recaptured the city of Tikrit. However, the advance of the Iraqi army and the militias stopped after ISIS launched a new wave of attacks. The battles are still continuing with some villages passing back and forth.

Amid the fierce battles, Ramadi residents are suffering from both the presence of ISIS militants and Shiite militias. According to the Iraqi government, more than 500 civilians were killed in the fighting, but the toll is likely to increase as there is no official count yet. ISIS militants have been searching door-to-door for government officials, police officers or anybody who has cooperated with Baghdad, throwing them in the Euphrates River in a bloody purge, the Associated Press (AP) reported. The Iraqi government said the city will be recaptured with the help of the militias. Yet, the U.S. and residents are concerned as the Shiite militias could possibly fuel sectarian division.

"Responding to a call from Prime Minister Haider al-Abadi, hundreds of Iranian-allied Shiite militiamen rushed to a military base near Ramadi, the capital of overwhelmingly Sunni Anbar province, to prepare for an assault to try to retake the city, Anbar officials said. The order came despite Obama administration concerns that the presence of Shiite fighters in the Sunni-dominated region could spark sectarian bloodshed. Until now, the defense of Anbar has been in the hands of the Iraqi military fighting alongside Sunni tribesmen, who al-Abadi's Shiite-led government had vowed to arm and support – something it has done only sporadically. The Shiite militias have been widely criticized over accusations of extrajudicial killings of Sunnis, as well as of looting and torching Sunni property – charges militia leaders deny," AP said. Yet Reuters reported that "a column of 3,000 Shiite militia fighters arrived on Monday at a military base near Ramadi."

"U.S. officials said Washington was deeply divided about the involvement of Shiite militias with links to Iran, a U.S. rival that has been expanding its influence throughout the Middle East. After spearheading the recapture of Tikrit, some Shiite fighters last month went on a spree of burning, looting and violence in the Sunni Iraqi city, according to local residents. 'There are people in our government who see any involvement of Iran as anathema. There are others who say the Shiite involvement will promote sectarian violence. There are others who say that's not true,' a … U.S. official said on condition of anonymity. One U.S. intelligence official said one concern was that ISIS could use the involvement of Shiite militias to itself stir up sectarian hatred," Reuters reported. Shiite militia involvement in the battle for Tikrit last month also raised concerns. Several rights groups along with the U.S. expressed their discomfort with the Iranian-backed groups. Shiite militias have been known to carry out atrocities against Sunnis and sectarian hatred increased after the latest developments in the region in Syria and Yemen.

Ramadi residents have had to leave the city and, according to the International Organization for Migration (IOM), 40,608 civilians were displaced. "IOM Iraq's Displacement Tracking Matrix (DTM) has recorded 40,608 individuals (6,768 families) displaced by violence in Ramadi since May 15. Of these, over 39,500 individuals (some 6,600 families) are displaced within Anbar governorate," the group said in a recently published report. The U.N. said as many as 114,000 residents fled from Ramadi and surrounding villages at the height of the violence. Local officials also reported that people are fleeing and leaving everything behind as ISIS militants carry out mass killings.
Last Update: May 19, 2015 10:08 pm
RELATED TOPICS