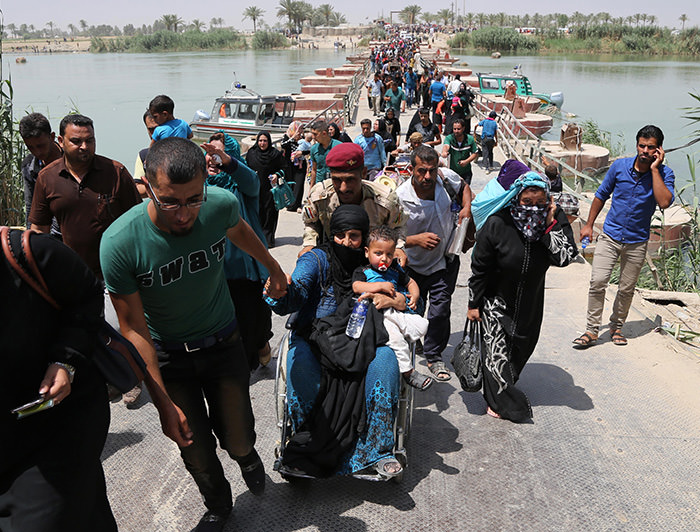 Displaced Iraqis from Ramadi cross the Bzebiz bridge fleeing fighting in Ramadi, 65 km west of Baghdad, Iraq, Wednesday, May 20, 2015 (AP Photo)
by Yusuf Selman İnanç May 20, 2015 12:00 am
The Islamic State of Iraq and al-Sham (ISIS) launched an attack on Anbar province over the weekend, capturing the city of Ramadi, which can be used as a base to reach the capital Baghdad. The Iraqi army, backed by the U.S. air force and Iran-backed Shiite militias on the ground had launched an operation against ISIS and recaptured the city of Tikrit. However, the advance of the Iraqi army and the militias came to a halt after ISIS launched a new wave of attacks. The battles are still continuing with some villages passing back and forth.

Most Ramadi residents have fled the city and, according to the International Organization for Migration (IOM), 40,608 civilians have been displaced. "Iraq's Displacement Tracking Matrix (DTM) has recorded 40,608 individuals (6,768 families) displaced by violence in Ramadi since May 15. Of these, over 39,500 individuals (some 6,600 families) are displaced within Anbar governorate," the group said in a recently published report. The U.N. said as many as 114,000 residents fled from Ramadi and the surrounding villages at the height of the violence. Local officials also reported that people are fleeing and leaving everything behind as ISIS militants carry out mass killings.

Shiite militias are expected to battle ISIS militants and save the residents. But it is well-known that these militias have committed atrocities against Sunnis in several Iraqi cities. Besides the militias, Iran also said it is ready to help Iraqi forces and has deployed tanks near the Iraqi border. The U.S., which had expressed concerns about the involvement of Iran and Shiite militias, has made contradictory statements. "U.S. officials said Washington was deeply divided about the involvement of Shiite militias with links to Iran, a U.S. rival that has been expanding its influence throughout the Middle East. After spearheading the recapture of Tikrit, some Shiite fighters last month went on a spree of burning, looting and violence in the Sunni Iraqi city, according to local residents," Reuters reported on Tuesday. Another piece, published by Reuters yesterday said that "U.S. assurances that ISIS rebels were on the defensive even as they drove Iraqi forces from the key city of Ramadi are typical of the often unwarranted optimism that has characterized U.S. public comments on the conflict, analysts said on Tuesday." "We firmly believe [ISIS] is on the defensive throughout Iraq and Syria, attempting to hold previous gains while conducting small-scale, localized harassing attacks, and occasional complex or high-profile attacks, in order to feed their ... propaganda apparatus," U.S. Marine Corps Brigadier General Thomas Weidley told reporters on Friday, two days before Ramadi's fall. Retired Army Lieutenant General David Barno, now at the American University in Washington, was quoted by Reuters as saying that "part of the U.S. portrayal of the conflict was due to the fog of war, not knowing what's actually going on on the battlefield, not being able to see what's occurring." "I think there has probably been an unwarranted amount of optimism about progress against ISIS over the last six months or so," Barno said. Anthony Cordesman, a defense analyst at the Center for Strategic and International Studies, told Reuters: "U.S. public comments about the battle against ISIS have done little to clarify the deep internal divisions among Sunnis, Shiites and Kurds that underlie the conflict. … We haven't learned much since the days of the Vietnam follies," he said, referring to the much-criticized military press briefings during that war. "There is always this tendency on the part of the PR people to spin things, always present the most favorable case rather than prepare people for the fact that some things are very difficult and uncertain," he said.

Senator John McCain of Arizona, who frequently criticizes U.S. policy in Syria and Iraq, told Fox News on Tuesday that the loss of Ramadi was the result of a failure in policy. Criticizing the withdrawal from Iraq, he said: "My friend [Senator] Lindsey Graham predicted exactly, unfortunately, what was going to happen in Iraq when the president of the United States, against all logic, withdrew every one of our troops from Iraq and left it to the tender mercies of [the former Iraqi prime minister, Nouri al-Maliki]." In response to the question of whether he believes that the Department of Defense and others are going to get this land back, McCain replied: "Too late, the way they're doing it now," and continued: "Well, I think they may be able to take Ramadi back, but you know who they're going to take it with? The Shiite militias, which are Iranian-run, sponsored, trained and equipped, and they are going to go into a Sunni area and they're not going to liberate, my friend. The Sunnis will never reconcile with the Shiite militias, which are sponsored by the Iranians. … It's not Americans that will free, regain Ramadi, the way that this administration is handling it. It will be the Shiite militias that go in. And that, of course, will mean a lot more bloodletting," he said.
Last Update: May 20, 2015 4:02 pm
RELATED TOPICS