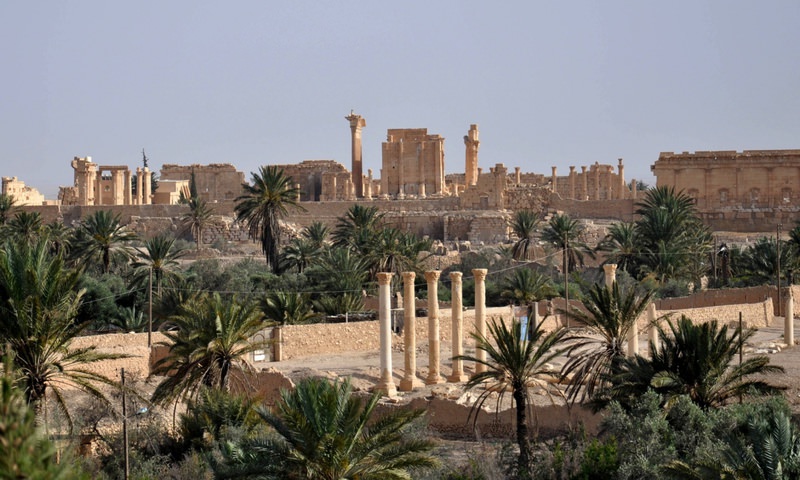 by May 20, 2015 12:00 am
The Islamic State of Iraq and al-Sham(ISIS) group fighters overran most of the historic Syrian city of Palmyra on Wednesday, in a blow to efforts to repel the advancing extremists after the fall of Iraq's Ramadi.

The ISIS fighters, notorious for demolishing archaeological treasures since declaring a "caliphate" last year straddling Iraq and Syria, appeared to have fought their way into Palmyra on foot after breaking through in the city's north.

It was unclear if they had reached Palmyra's UNESCO-listed heritage site, including ancient temples and colonnaded streets, and its adjacent museum housing priceless artefacts, located in the city's southwest.

"ISIS controls almost all of Palmyra" following the withdrawal of government troops from all sectors except for a prison in the east and military intelligence headquarters in the west, said Rami Abdel Rahman of the Syrian Observatory for Human Rights.

An activist originally from Palmyra, Mohamed Hassan al-Homsi, said on the Internet that "a large number of regime forces were seen gathering near the military intelligence branch and withdrawing."

Government warplanes responded by carrying out air strikes on ISIS positions in the city.

News of Palmyra's fall came shortly after a State Department official said the weekend loss of Ramadi had prompted the United States to take an "extremely hard look" at its strategy to confront the extremists.

"The situation is very bad," Syria's antiquities chief, Mamoun Abdulkarim, said after ISIS had captured the city's northern third earlier in the day.
"If only five members of ISIS go into the ancient buildings, they'll destroy everything," he added, calling for international action to save the city.

The head of the UN cultural agency, Irina Bokova, has warned that the fighting in Palmyra was "putting at risk one of the most significant sites in the Middle East".

Hundreds of statues and artefacts from Palmyra's museum have been transferred out of the city, according to Abdulkarim, but many others -- including massive tombs -- could not be moved.

The ISIS fighters already sparked international outrage this year when they blew up the ancient Assyrian city of Nimrud and smashed artefacts in the museum of Mosul, both in Iraq.

Asked if ISIS would be able to reach Palmyra's ruins, a Syrian military source said "everything is possible".

Mohammad Hassan Homsi, another activist originally from Palmyra, said the fleeing regime soldiers "headed to the military intelligence headquarters near the ruins".

The group's capture of the city was their most significant victory since mid-2014 when they conquered swathes of land, sparking a US-led air campaign to support Baghdad.

On Wednesday, the Anbar police chief was dismissed, after video footage emerged online from fighters in Ramadi suggesting security personnel deserted their posts at the height of the ISIS offensive.

In Ramadi, an explosives-packed bulldozer was used to blow up the security perimeter around a government-held compound.

Around 30 vehicles such as Humvees then flowed in, 10 of which were carrying enough bomb-making materials to carry out explosions the size of the blast of the 1995 Oklahoma City bombing.

There were "gigantic explosions that took out entire city blocks," the official said.

"These enormous suicide VBIEDs is something that we have to help the Iraqis, and our partners in Syria, defeat."

The United States has also said it is now considering accelerating the training and equipping of tribal forces to fight ISIS.

Besides the more than 3,000 air strikes carried out so far, Washington has supported a deep reform of Iraq's army and offered training to Sunni tribesmen.

But that failed to prevent the loss of Ramadi, where militias backed by US arch-foe Iran will now take the lead in any counter-attack.