ISIS controls more than half of Syria, monitor says 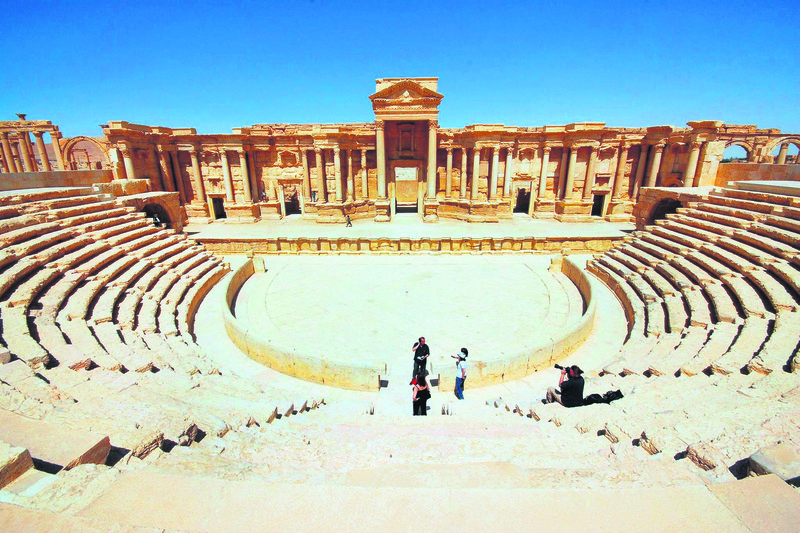 Tourists take pictures at the ancient Palmyra theater in the historical city in 2008.
by Compiled from Wire Services May 21, 2015 12:00 am

After seizing the ancient town of Palmyra, ISIS gained control of more than half of Syrian territories despite ongoing airstrikes carried out by the U.S. -led coalition, according to a monitoring group

The Islamic State of Iraq and al-Sham (ISIS) seized full control of the ancient Syrian city of Palmyra on Thursday, a monitor said, putting the world heritage site at risk of destruction and started controlling more than half of Syria. The Syrian Observatory for Human Rights said ISIS now controls half of all the territory in the war-torn country.

The Britain-based group said regime troops had withdrawn from positions in and around Palmyra, including from an army intelligence outpost, a military airport and a prison that ISIS militants captured overnight. "ISIS fighters are in all parts of Tadmur, including near the archaeological site," observatory head Rami Abdel Rahman told AFP, using the Arabic name for the city. Mohammad Hassan al-Homsi, an activist from Palmyra said, "Regime troops collapsed and withdrew from their positions without resistance."

The capture of the ancient city, which houses colonnaded streets and ruined temples that date back thousands of years, has raised fears that its treasures could be plundered like archeological sites overrun by the militants in Iraq. The radical group has destroyed antiquities and monuments in Iraq and there are fears it might now devastate Palmyra, an ancient World Heritage site and home to renowned Roman-era ruins including well-preserved temples, colonnades and a theatre. "This is the fall of a civilization," Syria's antiquities chief Maamoun Abdulkarim told Reuters by telephone on Thursday. "Human, civilized society has lost the battle against barbarism. I have lost all hope." Palmyra is also strategically located at the crossroads of key highways leading west to Damascus and Homs, as well as east to Iraq.After seizing Palmyra, ISIS now controls more than half of Syria, the monitoring group said. The Syrian Observatory for Human Rights said ISIS rules around 95,000 square kilometers, or more than 50 percent of Syria's total geographic area. The al-Qaeda splinter group now has a presence in nine of Syria's 14 provinces, mainly in the east and north, according to the Britain-based Observatory. ISIS also controls Syria's major oil and gas fields, except the al-Shaar field which is still controlled by the government in the desert region of Palmyra and the Ramilan fields controlled by Kurdish rebels in al-Hassakeh region near the Iraqi border, according to the watchdog. ISIS has still made advances despite the U.S. -led coalition that continues to pound the militants' targets.

ISIS started a major offensive against regime forces in Palmyra on May 13, taking advantage of the exhaustion of the Syrian army locked for more than four years in a fight against a wide spectrum of rebels seeking to oust President Bashar Assad. Palmyra is also symbolic as it is home to Syria's most notorious political prison, where hundreds of Islamist detainees were massacred in 1980 after an assassination attempt against the then President Hafez Assad, father of Bashar. "There has been no electricity in the city for the past four days. Most hospitals have a shortage of essential medicines," the observatory's head Abdel-Rahman, said. He added that more than 100,000 people, mostly refugees from other conflict areas in Syria, used to live in Palmyra before its fall to ISIS. Activists at the Tadmur Media Center told DPA that ISIS fighters imposed a curfew on the city after seizing it to hunt for government forces and their allies.
Last Update: May 21, 2015 9:12 pm
RELATED TOPICS