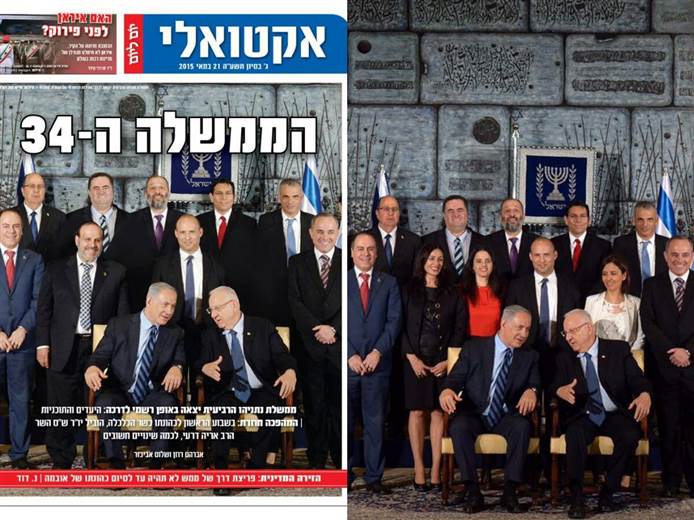 by Daily Sabah May 21, 2015 12:00 am
An ultra-Orthodox newspaper in Israel has removed three women ministers from a group photo of the newly appointed Israeli government, headed by Prime Minister Benjamin Netanyahu.

The traditional group photo of new ministers at the president's house in Jerusalem that was published on the newspaper's cover contained three women ministers; Justice Minister Ayelet Shaked, Culture Minister Miri Regev and Minister for Senior Citizens Gila Gamliel but readers of the Yomleyom weekly newspaper didn't know, as the ministers had been digitally removed.

The ultra-Orthodox publications in Israel are known for not showing women in their print pages or websites as some of the news outlets also cut out some women like, German Chancellor Angela Merkel and Kim Kardashian from recent news stories.

Rabbi Moshe Shafir, deputy editor of the newspaper, said "The Torah upholds the honor of women and their freedom. We honor the women specifically because of their special merits and we have reservation from looking upon women as an object,"

He added even people that hold high ranks, and even with presidents in Israel and in the world will not be any exception.
Last Update: May 21, 2015 7:36 pm
RELATED TOPICS