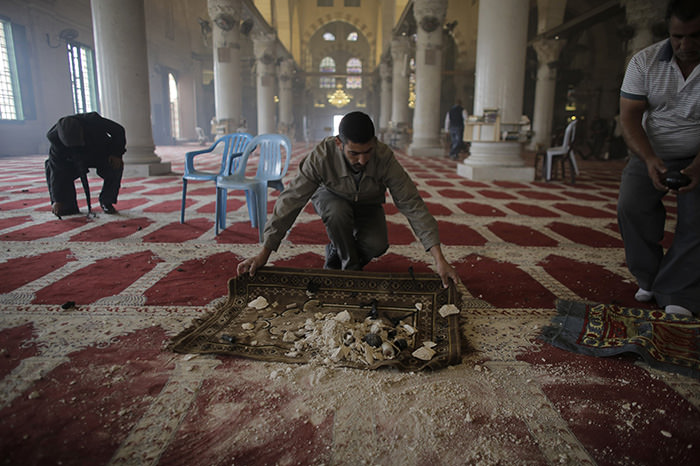 Palestinians clean the Al Aqsa mosque after clashes with Israeli police on the compound known to Muslims as Noble Sanctuary and to Jews as Temple Mount in Jerusalem's Old City November 5, 2014 (Reuters Photo)
by Anadolu Agency May 25, 2015 12:00 am
Scores of Jewish settlers forced their way into occupied East Jerusalem's flash-point Al-Aqsa Mosque compound on Monday to mark the Jewish Shavuot holiday, a Palestinian official has said.

"The settlers inspected the complex, passing by the Al-Qibali and the Dome of the Rock mosques, and tried to perform Talmudic rituals before leaving the compound through the Al-Silsila Gate," he said.

Al-Qiswani added that the Israeli army had detained five Palestinians inside the holy complex and transferred them to a detention center in Jerusalem's Old City.

Tension has run high at the flashpoint site since Sunday morning against the backdrop of calls by several Jewish organizations for supporters to enter the holy site en masse to mark the holiday.

Israel occupied East Jerusalem during the 1967 Middle East War. It later annexed the holy city in 1980, claiming it-in addition to West Jerusalem-as the unified capital of the self-proclaimed Jewish state in a move never recognized by the international community.

In September 2000, a visit to Al-Aqsa by controversial Israeli politician Ariel Sharon sparked what later became known as the "Second Intifada," a popular uprising against Israel's decades-long occupation in which thousands of Palestinians were killed.
Last Update: May 25, 2015 1:10 pm
RELATED TOPICS