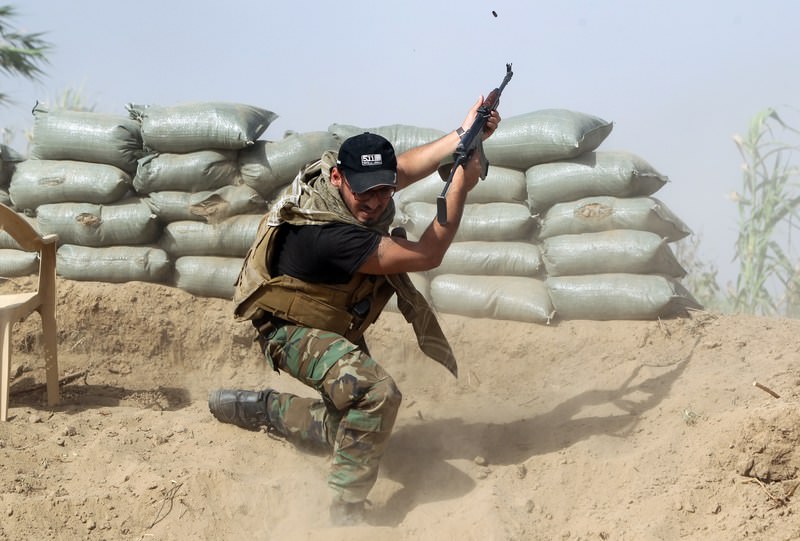 Iraqi Sunni fighters battling Islamic State (IS) alongside government forces fire their weapons on the outskirts of Iraq's Baiji oil refinery (AFP Photo)
by May 26, 2015 12:00 am
Iraqi police have said on Tuesday that security forces had surrounded Ramadi, capital of western Anbar province, on three sides ahead of an operation to recapture it from the self-proclaimed Islamic State in Iraq and Syria (ISIS) militants.

The Iraqi army and police were taking part in operations alongside mainly Shiite volunteers from across the country and local tribes from the Sunni province, Captain Ahmad Ibrahim of the Anbar police command told German Press Agency (DPA).

A senior military official, who asked not to be named, said that the government had "given the green light" for the launch of an offensive intended to clear Islamic State from Anbar, nine days after the extremists took full control of Ramadi.

"The legions of our armed forces ... with the support of the Popular Mobilization and the tribesmen, are now beginning the operation to free Anbar from the Islamic State gangs," Defence Minister Khalid al-Obeidi wrote on his Facebook page.

It was not immediately possible to confirm the scale of operations carried out by pro-government forces, which have been clashing with ISIS in areas east of Ramadi since the city fell on May 17.

Pro-government Shiite militias, officially operating under the banner of the Popular Mobilization volunteer forces, have reportedly been gathering at Habbaniya base east of Ramadi in preparation for a counter-offensive.

The fall of Ramadi was seen as a major reverse for the Iraqi government and for a US-led coalition against the militants.

It means any operation to recapture Iraq's second city, Mosul, from ISIS is unlikely to take place in the immediate future.
Last Update: May 26, 2015 7:18 pm
RELATED TOPICS