Two-thirds of Yemenis have no access to safe water 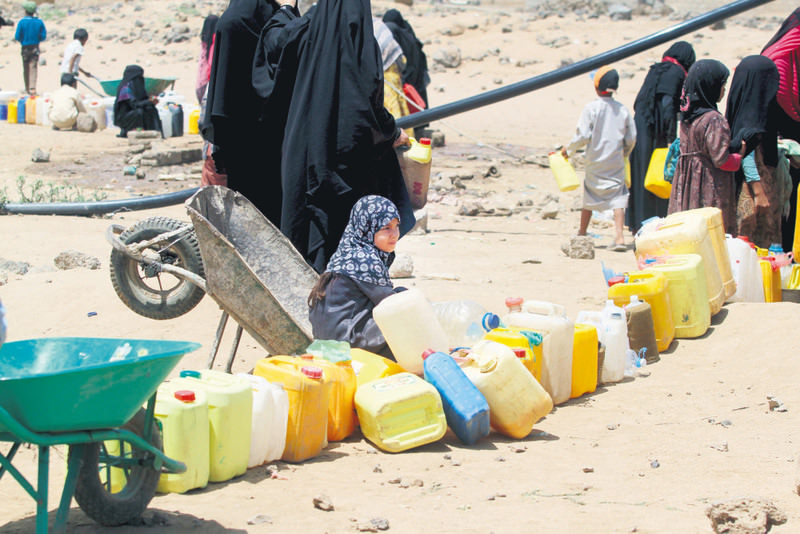 People wait to collect water from a public tap amidst an acute water shortage in Sanaa.
by Daily Sabah May 26, 2015 12:00 am

The war-torn country faces a catastrophic humanitarian crisis as millions of people suffer from a lack of access to clean water as airstrikes have damaged large parts of water network, a relief group reported

Almost two-thirds of the population of war-torn Yemen has no access to clean water, two months into the Saudi-led air campaign against rebel forces, Britain-based relief agency Oxfam said Tuesday. "Ongoing air strikes, ground fighting and fuel shortages mean that an additional three million Yemenis are now without drinking water, raising the total number of Yemenis without a clean water supply and sanitation to at least 16 million," the organization said. "This is equivalent to the populations of Berlin, London, Paris and Rome combined," Oxfam's Yemen director Grace Ommer said in a statement. Even before the escalation in fighting, half the population of the impoverished nation had no access to clean drinking water, the group underlined. Weeks of air strikes and ground fighting have damaged and disrupted large parts of the water network, Oxfam said. "People are being forced to drink unsafe water as a result of the disintegration of local water systems, bringing the real risk of life-threatening illnesses, such as malaria, cholera, and diarrhea," the organization said.

Yemen, the poorest country in the Middle East, hit by political instability and intermittent violence, is now facing a major humanitarian crisis, with 15.9 million people in the country in dire need of humanitarian assistance, according to the United Nation's Office for Coordination of Humanitarian Affairs (OCHA) figures. The humanitarian situation has become worse than ever with the long absence of political authority in the country; The Houthi rebels have consolidated their grip on power, anti-coup protests have escalated and the country is being dragged into a perpetual state of turmoil.

Yemen has the third highest malnutrition rate in the world, as over 10 million Yemenis are experiencing food shortages. As the political conditions in the country have steadily worsened, the food security situation has severely deteriorated. Yemeni children have become the most vulnerable due to continuing violence in the country. The number of acutely malnourished has hit 840,000.

The Saudi-led U.S.-backed alliance continues to pound Houthi targets as part of Operation Decisive Storm, which was launched on March 26, to halt the Houthis advance. The coalition includes Bahrain, Egypt, Jordan, Kuwait, Morocco, Qatar, Sudan, and the United Arab Emirates, who have conducted numerous airstrikes throughout Yemen against Houthi forces. Operation Decisive Storm ended on April 21 and immediately afterwards, Operation Restore Hope was launched by the Saudi-coalition. The intense fighting has come with a heavy toll on the civilian population in an already fragile humanitarian situation. At least 828 civilians have died as a result of the conflict, and more than 300,000 have been displaced, according to U.N. figures. More than 250,000 refugees in Yemen were caught up in the ongoing conflict, becoming victims of war.

The capital Sanaa has been under Houthi rebel control since September last year. Since then, Iran-allied Shiite Houthis have made significant gains while taking northern Yemen. They have been expanding their territory, clashing with President Abd Rabbuh Mansour Hadi's loyalists, local tribes and radical groups including al-Qaida on the Arabian Peninsula (AQAP), which also pose a significant security threat to the country's political stability.

Yemen is of crucial importance for the U.S., as the country is home to one of their worst enemies, al-Qaida's deadliest franchise, the AQAP, which has orchestrated numerous high-profile terrorist attacks, including claiming responsibility for the Jan. 7 Charlie Hebdo massacre in Paris. Since 2002, the U.S. has been conducting counterterror strikes and operations against radical militants as part of U.S. national security policy. During the Obama administration, there have been 15 air strikes and 107 drone strikes in Yemen as part of a "targeted-killing policy." The the practices of the Obama administration raise serious laws-of-war concerns regarding the human cost of U.S security policy in Yemen.

Additionally, Yemen plays a significant role for Saudi Arabia against Iran's influence over the violence-hit Middle East region. The advance of the Iranian-allied Shi'ite Houthi group raises fears of the possible disintegration of the country. The capital Sanaa has been under Houthi rebel control since September last year. The country has been facing severe political instability after the takeover of the presidential palace by Houthi militants, prompted Hadi to tender his resignation. Hadi fled to the southern port city of Aden, where he has re-established his presidency. As the country has been dragged into a civil war, the U.N. has started to hold mediated peace talks between Houthis and Hadi's government in a bid to bring peace and stability back to the country.
Last Update: May 26, 2015 10:44 pm
RELATED TOPICS