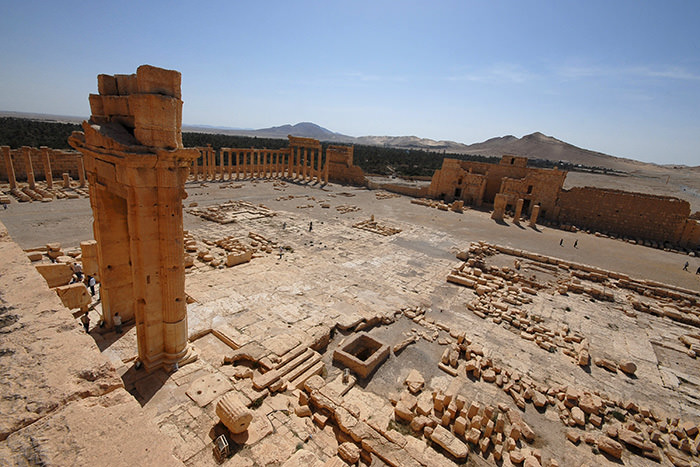 A general view of the Temple of Bel in the historical city of Palmyra April 18, 2008 (Reuters Photo)
by Daily Sabah May 28, 2015 12:00 am
The Islamic State of Iraq and al-Sham (ISIS) posted photos online, which it said were taken in the central Syrian city of Palmyra, that appeared to show its ancient ruins unharmed since the group seized it from government forces two weeks ago. Reuters reported that activists in contact with people inside the city have confirmed no damage has been dealt to the UNESCO World Heritage Site. A YouTube account believed to be affiliated with ISIS posted a video on Tuesday showing that the ancient ruins were undamaged. Activists claimed that ISIS will not destroy the ancient ruins totally, but is choosing to destroy the ancient statues.

"They haven't been damaged and members of the organization [ISIS] told residents that they will not damage the city's antiquities, but will destroy the idols," an activist with the anti-regime Local Coordination Committee for Tadmur was quoted by The Guardian as saying.

"Perhaps it's because the Palmyra antiquities are mostly columns and large buildings and not statues of people, which they consider idols that must be destroyed, and they have no problem with such antiquities," the activist said.

A pro-opposition radio station also talked to an ISIS militant who said the group will not touch the site, but will destroy the idols. "Concerning the historic city, we will preserve it and it will not be harmed, God willing. What we will do is break the idols that the infidels used to worship. The historic buildings will not be touched and we will not bring bulldozers to destroy them like some people think," the militant said.

The group has destroyed antiquities in neighboring Iraq, and Syria's antiquities chief had voiced fears it might now devastate Palmyra, home to renowned Roman ruins including temples, colonnades and an amphitheater. The group has also destroyed several Islamic heritage buildings including shrines and some mosques.
Last Update: May 28, 2015 4:09 pm
RELATED TOPICS