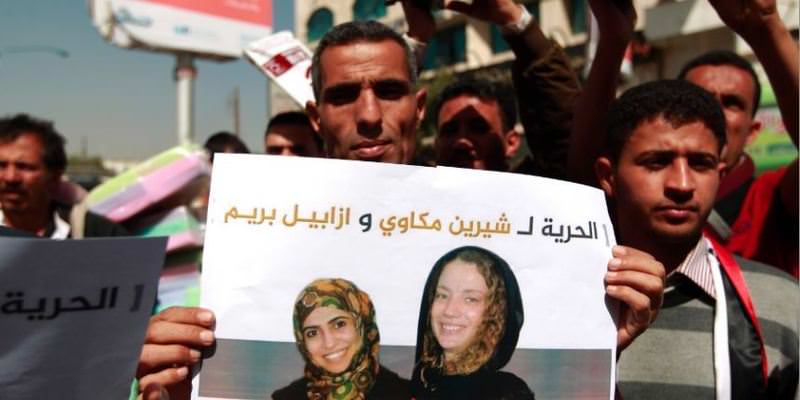 by Associated Press Jun 01, 2015 12:00 am
One of several Americans held by Iranian-backed Shiite rebels in Yemen was set free on Monday, a U.S. official said, as a French hostage abducted in Yemen by an unknown party appeared in a video pleading for help.

The rebels, known as Houthis, seized the capital last year and have been the target of a U.S.-backed and Saudi-led air campaign since March 26. The deal to release the American, who was not immediately identified, was mediated by Oman.

The released American, who had been injured in unknown circumstances, was on his way to Oman, according to the U.S. official, who was not authorized to publicly discuss the matter because of privacy rules and spoke on condition of anonymity. No details on the identity of the freed captive were immediately available.

A video meanwhile surfaced showing Frenchwoman Isabelle Prime, a World Bank consultant who was kidnapped in February, pleading for help. The Associated Press viewed the video on Monday.

Prime was abducted in the rebel-held capital, Sanaa, along with her Yemeni translator, who was released shortly afterward. There was no word until now on her fate.

The Houthis control the capital, but Yemen is also home to a powerful local al-Qaida affiliate that has carried out attacks in Sanaa and which has abducted foreigners in the past to trade for ransom or imprisoned militants.

In the video, Prime appeared sitting in the desert dressed in a black robe and looking frail and anguished. She addressed French President Francois Hollande and Yemeni President Abed Rabbo Mansour Hadi by name, saying, "Please bring me to France fast because I am really, really tired."

French Foreign Ministry spokesman Romain Nadal said his government has verified the authenticity of the video and that it was filmed in April. Nadal said officials from the ministry will meet with the Prime family on Tuesday.

He told AP that the French government is "mobilized to obtain the release" of Prime.

Word of four abducted Americans first surfaced on Friday when The Washington Post reported that three held private sector jobs, and that the fourth holds dual U.S.-Yemeni citizenship. It said the Americans are believed to be imprisoned in Sanaa. A day later, the State Department said it was working to win the release of several Americans detained in Yemen.

Another American, Sharif Mobley, has been held in unclear circumstances for more than five years. Terrorism charges against him were dropped by a court during the rule of President Ali Abdullah Saleh, who stepped down in the face of massive protests in 2012. But Mobley was never released, and was accused of killing a prison guard during an escape attempt. He is now believed to be in the custody of the Houthis, who are allied with Saleh.

The Post report said the four most recently detained are among dozens of Americans who were unable to leave Yemen or who chose to remain in the country after the U.S. closed its embassy following the Houthis' capture of the capital.

The Saudi-led coalition launched its air campaign on March 26 in a bid to roll back the rebels and restore to power President Abed Rabbo Mansour Hadi, who fled to Saudi Arabia that month in the face of a rebel advance on the south. But two months of bombing have done little to push back the Houthis and allied military units loyal to Saleh.

The airstrikes and ground fighting have killed more than 1,000 civilians and displaced a half million people, according to the U.N.

On Monday, coalition warplanes bombed the capital, targeting weapons depots in nearby Noqoum mountain. An Associated Press video showed heavy smoke rising from the mountain as explosions rocked the area.

The ongoing fighting forced a ship carrying food aid to change course. The ship, chartered by the United Nations World Food Program, was destined for the Yemeni port of Aden, but port authorities warned it to change direction because of the fighting and head to the western Red Sea port city of Hodeida, a statement from the group said.
Last Update: Jun 01, 2015 8:31 pm
RELATED TOPICS