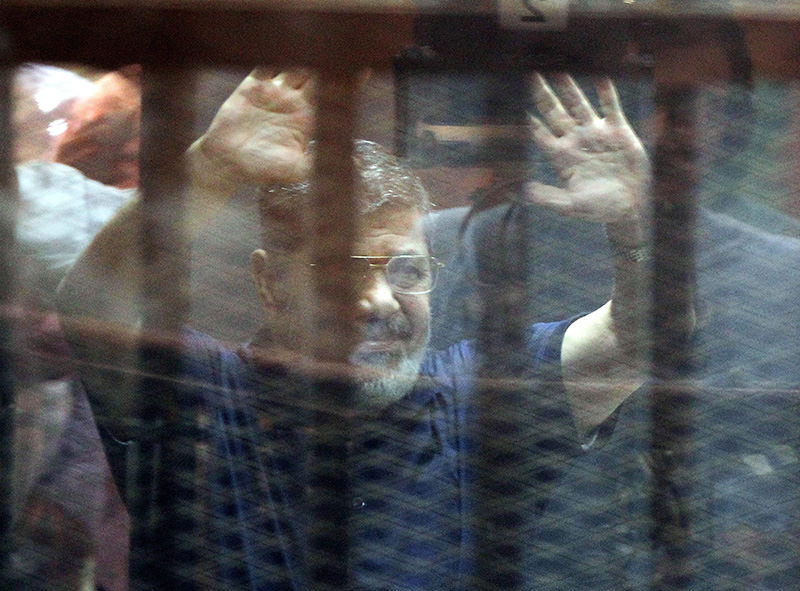 A file photo dated 16 May 2015 showing Mohamed Morsi, gesturing from inside a cage in the courtroom where he stood trial in Cairo, Egypt (EPA Photo)
by Compiled from Wire Services Jun 02, 2015 12:00 am
An Egyptian court postponed issuing a final ruling over a death sentence recommendation for the country's first democratically elected president, Mohamed Morsi, and other top Muslim Brotherhood leaders in a case related to a 2011 jail break.

The judge said the case was postponed to June 16.

Presiding judge Shaaban al-Shami said, the court had only just received the opinion of the country's highest religious authority, the Grand Mufti, on whether a death sentence was warranted.

Al-Shami two weeks ago referred the case to the Grand Mufti for his advisory opinion as required under Egyptian law in death penalty cases. Al-Shami said the court received the Grand Mufti's opinion on Tuesday morning and needed time to discuss it.

Morsi can appeal the verdict. He has said the court is not legitimate, describing legal proceedings against him as part of a coup by former army chief Abdel Fattah al-Sissi in 2013.

The court referred 122 out 166 defendants, including Morsi to the grand mufti to consider death sentences against them over charges of jailbreak and espionage.

Last month, Morsi, who became Egypt's first freely elected president in 2012 after the ousting of President Hosni Mubarak, and 12 co-defendants were sentenced to 20 years in prison for organizing attacks on protesters in 2012.

Morsi was ousted by a military coup in 2013.