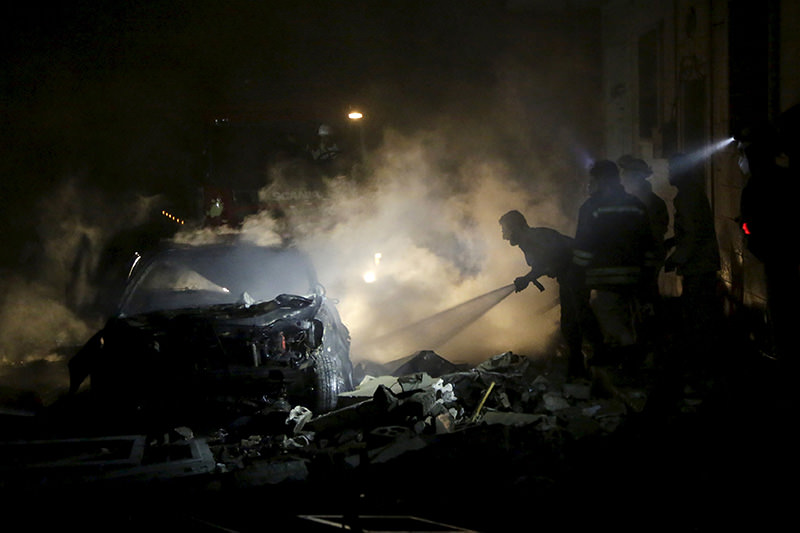 Civil defense members put out a fire at a site hit by what activists said was a barrel bomb dropped by forces loyal to Syria's President Bashar al-Assad in Maaret al-Naaman town in Idlib province June 4, 2015 (Reuters)
by Daily Sabah with Wires Jun 04, 2015 12:00 am
The Syrian regime renewed its use of toxic chemicals in several attacks in the Idlib governorate in April and May 2015, the New York-based human rights organization, Human Rights Watch (HRW), said on Wednesday, urging the U.N. Security Council to immediately create a mechanism to identify those responsible for the use of the internationally banned weapons.

"While [U.N.] Security Council members deliberate over the next steps at a snail's pace, toxic chemicals are raining down on civilians in Syria," said Philippe Bolopion, HRW U.N. and crisis advocacy director. "The Security Council should firmly establish responsibility and impose sanctions for these attacks, which defy its resolution and violate international law."

HRW conducted inquiries into three separate attacks in May in the Idlib governorate to determine the toxic chemicals used in the three separate attacks. The use of barrel bombs embedded with cylinders of chlorine gas by government forces in Idlib in April 2014 and again in March 2015 was also documented by HRW.

Syrian President Bashar Assad has long denied that his forces use toxic chemicals in attacks. Russia, a strong ally of the Syrian regime, has demanded accountability for the chlorine attacks in Syria, saying that the U.N. Security Council should make sure that the people allegedly responsible for them in Syria should be brought to justice. Russian U.N. ambassador Vitaly Churkin said Wednesday that council members need to look at "the most effective ways to accomplish that," which could be a legally binding resolution or some other means.

Meanwhile, at least 37 people, including 10 children, were killed in government barrel bomb attacks by regime forces in northern Syria on Wednesday.

The regime has lost large areas of land in the last two months to insurgents, including the al-Qaeda-linked Nusra Front and the Islamic State of Iraq and al-Sham (ISIS), which last month seized the ancient city of Palmyra in Homs province. ISIS militants continue advancing in northeastern Syria, moving closer to the city of al-Hassakeh, the Syrian Observatory for Human Rights said on Thursday.

The Fatah Army, a rebel coalition headed by al-Nusra Front, captured the last regime-held town in Idlib province, Ariha, in late May. The Fatah Army has won a string of victories in Idlib since early April as rebel groups, except for ISIS, after ending internal disputes, have unified and concentrated on advancing on Latakia. Rebels have recently made the most significant gains since the war started in 2011. More than a month ago, opposition groups under the umbrella of the Fatah Army captured the city center of Idlib, which was hailed as a huge gain against the Assad regime.