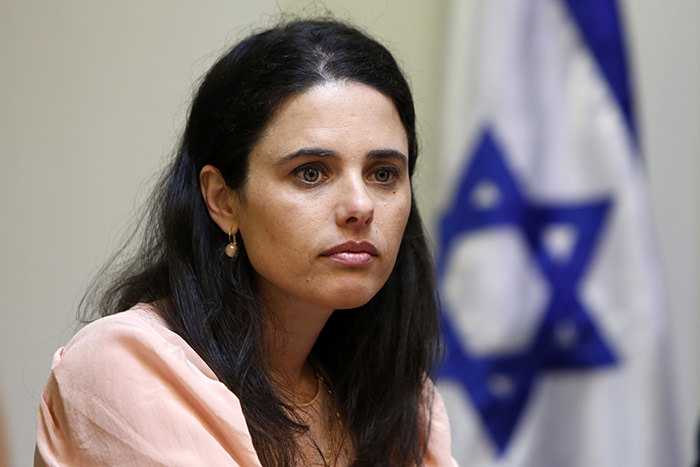 Israeli Knesset Member Ayelet Shaked of the far-right Jewish Home party is seen on May 6, 2015 during the negotiation with the Likud at the parliament in Jerusalem. (AFP Photo)
by Mehmet Çelik Jun 05, 2015 12:00 am
Israel's Minister of Justice Ayelet Shaked, a well-known far-right Israeli politician who has made controversial remarks about Palestinians, such as labeling them all terrorists and wishing death to all Palestinian mothers, has called on Israelis to boycott anyone that boycotts Israel.

Shaked said that in return to the groups boycotting Israel for its human rights violations against Palestinians, Israel should "boycott whoever boycotts us," during her speech in the Knesset on June 3.

Shaked's hard-liner has sparked criticism among the country's opposition, blaming Israel's isolation and the boycotts on specifically Israeli Prime Minister Benjamin Netanyahu's right-wing government policies. The opposition claims that Israel is not innocent and that the so-called anti-Semite movements are not solely against Israelis for being Jewish. The reasons for boycotting are not baseless, particularly when it comes to the continued construction of new settlements in the occupied territories, the siege on Gaza and turning it to an open-air-prison, killing Palestinian civilians and destroying their houses, the opposition adds.

"To make it easy for her, we have prepared a list of a (small) number of the entities that have boycotted us recently, and that Shaked will have to boycott back: The largest pension fund in the Netherlands, the largest water company in the Netherlands, the largest security firm in Britain, the Romanian government, the Norwegian government's pension fund, Denmark's Danske Bank, university lecturers' organizations in Britain and the United States, labor unions in Europe, postal workers in Canada, a U.S. pension fund, the South African government, a labor union in Ireland, Roger Waters and 700 other artists, European countries that in 2013 urged they be removed from the EU research and innovation program Horizon 2020, buyers in Europe who refuse to buy peppers grown in the Arava and vegetables from the Jordan Valley, the countries that tried to oust us from FIFA and, as noted, the CEO of Orange," Haaretz said, emphasizing the action taken by international parties as a result of the Netanyahu government's rejectionist policies.

"And mainly, Ms. Shaked, you will have to boycott U.S. President Barack Obama, who – the nerve of him – dared to say on television (ours!) that in light of Netanyahu's refusal to recognize the two-state solution, the United States will find it difficult to veto European initiatives in the United Nations to end the occupation," Haaretz added.

Among the global movements boycotting Israel is the group called Boycott, Divestment and Sanctions (BDS). The group aims to boycott Israel until it complies with international law and Palestinian rights. It was initiated by Palestinian civil society in 2005 and is coordinated by the Palestinian BDS National Committee (BNC), which was established in 2007. The Netanyahu government has taken a harsh stance against BDS, further legitimizing their struggle.

Breaking the Silence, a left-wing nongovernment organization formed by a group of "veteran combatants who have served in the Israeli military since the start of the Second Intifada and have taken it upon themselves to expose the Israeli public to the reality of everyday life in the occupied territories," as they have described themselves on their website, is another group that stands against Israeli government's hawkish attitude. Breaking the Silence met with senior White House officials this week to hear with testimonies that the organization had collected on alleged human-rights violations by the Israel Defense Forces during last summer's war in Gaza. The Israeli government has opposed Breaking the Silence, and attempts have been made to cancel their international events. Despite pressure from the Israeli government, hosting countries have supported the movement.
Last Update: Jun 05, 2015 3:30 pm
RELATED TOPICS