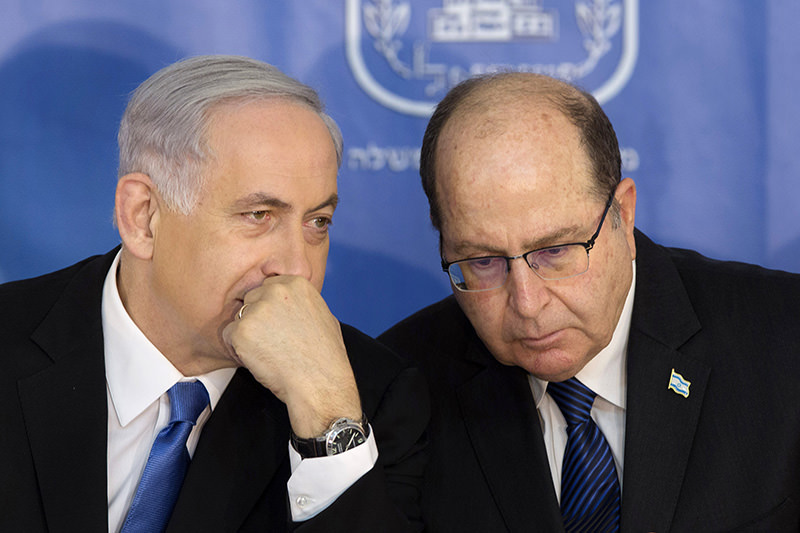 Israeli PM Benjamin Netanyahu, left, speaks with Israel's Defense Minister Moshe Yaalon during a ceremony for new Israeli Chief of Staff Gadi Eizenkot at the PMu2019s office in Jerusalem on Feb. 16, 2015 (AP Photo)
by Jun 09, 2015 12:00 am
Israel's defense minister, Moshe Yaalon, said on Tuesday he did not believe a stable peace agreement could be reached with the Palestinians in his lifetime - one of the bleakest assessments from a top-level cabinet member since talks collapsed last year.

Moshe Yaalon, one of Prime Minister Benjamin Netanyahu's closest allies, accused the Palestinians of having "slammed the door" on efforts to keep discussions going, and said they had rejected peace-for-land deals for at least 15 years.

His comments, in a speech to a strategic conference, were dismissed by a Palestine Liberation Organization official who told Reuters that Netanyahu's administration bore the blame for the impasse.

Peace negotiations broke off in April 2014, with disputes raging over Israeli settlement building in occupied land Palestinians seek for a state and Palestinian President Mahmoud Abbas's unity deal with Hamas who rules Gaza.

"As for the possibility of reaching an agreement ... there is someone who says he doesn't see one during his term," Yaalon said, referring to remarks U.S. President Barack Obama made in an Israeli television interview last week.

"I don't see a stable agreement during my lifetime, and I intend to live a bit longer," Yaalon told the Herzliya Conference, held annually near Tel Aviv.

Netanyahu was due to address the forum later in the day.

Youssef said Netanyahu's administration bore responsibility for the current impasse through its settlement activities, refusal to release jailed Palestinians and demand Palestinians recognize Israel as the nation-state of the Jewish people.

On the eve of his March 17 election to a fourth term, Netanyahu drew international criticism by saying there would be no Palestinian state if he remained Israel's leader.

Netanyahu has since sought to row back, insisting he remained committed to a "two-state solution" in which Palestinians would establish a demilitarized country and recognize Israel as the Jewish homeland.

In his television interview, Obama said Netanyahu's position "has so many caveats, so many conditions that it is not realistic to think that those conditions would be met at any time in the near future".