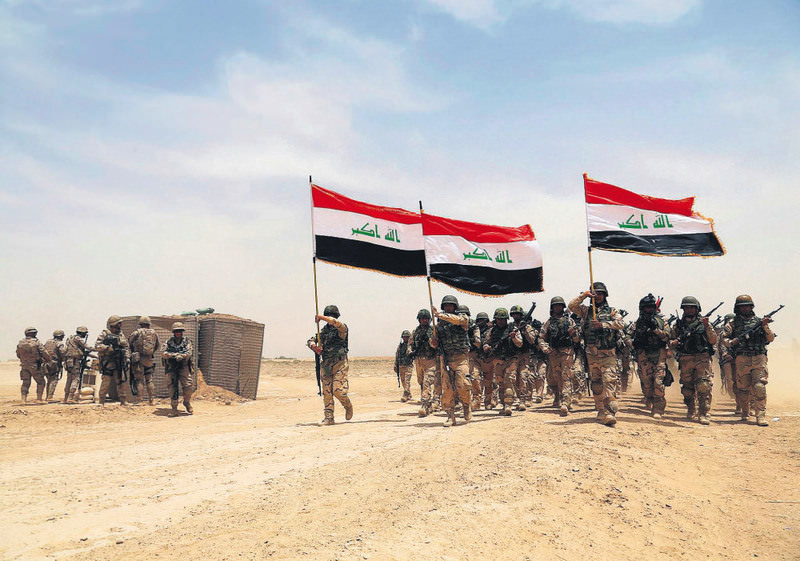 U.S. soldiers participated in a training mission with Iraqi army soldiers outside Baghdad, Iraq, on May 27.
by Daily Sabah with Wires Jun 11, 2015 12:00 am

U.S. President Obama ordered the deployment of up to 450 U.S. troops to Iraq to advise and assist local forces, as part of a renewed strategy that addresses the need to get Sunnis more involved in the fight against ISIS

As part of the renewed strategic plan to bolster its train-and-assist program for Iraqi security forces and tribal fighters, up to 450 more American troops will be deployed to Iraq in the next six to eight weeks and set up a fifth training site al-Taqaddum, the Obama administration announced on Wednesday. Arming Sunni tribes in the western province of Anbar is key to defeating the Islamic State of Iraq and al-sham (ISIS), Iraqi Finance Minister Hoshyar Zebari said on Thursday in an exclusive interview with Al Arabiya News Channel. "The fall of Anbar was a setback we are trying to remedy," he said. "The government, al-Hashid [Popular Mobilization units] and the international coalition are exerting great efforts to recapture Ramadi. The international coalition has increased the pace of armament and air strikes, and we have a clear commitment from them to increase the arming and training of Sunni tribes in Anbar and this is one of the conditions to defeating ISIS," he added.

The training site will be dedicated to helping the Iraqi Army integrate Sunni tribes into the fight, an element seen as crucial to driving the ISIS militants out of the Sunni-majority areas of western Iraq and regaining Ramadi, the capital of Anbar province, which fell back into the hands of ISIS on May 14, with U.S. officials initially scrambling to minimize the significance of the strategic defeat. Iraqi Prime Minister Haider al-Abadi vowed to swiftly retake Ramadi, but operations have been sluggish and questions are still being asked about the security forces' ability following their chaotic retreat from the city. Apart from Ramadi, establishing firm control over Baiji is seen as key to isolating ISIS in the vast western province of Anbar, the reconquest of which is Baghdad's declared priority.

More than 9,000 Iraqi troops have completed training while an additional 3,000 are currently in the process, according to the White House. The U.S. and coalition partners are currently training Iraqi forces in al-Asad, Besmaya, Irbil and Tajib.

Amid persistent setbacks in the fight against ISIS, President Barack Obama turned his military's focus to the Sunni-Shiite divide, ordering hundreds of troops to Iraq to better integrate Iraqi forces and lay the groundwork to retake Ramadi and other key cities. The expanded military campaign will set up a new base in Anbar to advise Iraqi forces on how to plan and organize operations and help them reach out to Sunni tribes and bring them into the battle. But it leaves out any move to send U.S. forces closer to the front lines, either to call in airstrikes or advise smaller battlefront units, underscoring Obama's reluctance to plunge the military deeper into war and risk the sight of more body bags coming home from Iraq.

Meanwhile, Australian Prime Minister Tony Abbott warned of the global threat posed by ISIS and urged for more effective anti-ISIS coalition action during a regional conference, the Countering Violent Extremism summit in Sydney. The two-day conference was attended by some 27 ministers and officials from the region, with a focus on fighting online radicalization, which Abbott called a "hydra-headed monster." "The conflict in the Middle East is reaching out to us even in suburban bedrooms," he was quoted as saying by The Australian newspaper. "What we've seen in Australia, quite young adolescents, almost children, have been radicalized online by participating in chat rooms with people around the world." Social media executives, including from Google, Twitter and Facebook, also attended the meeting to address the flow of propaganda from ISIS recruitment networks, which can reach 100,000 pieces per day, the report said.
Last Update: Jun 11, 2015 11:40 pm
RELATED TOPICS