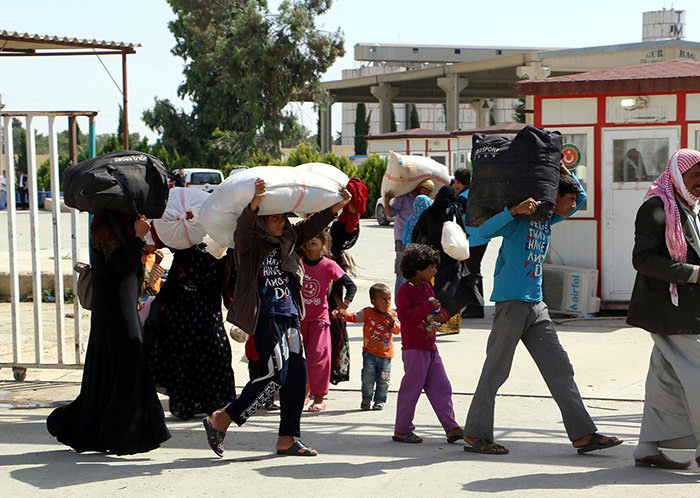 Armed Kurdish factions fighting against ISIS have been successful in pushing back the group but have allegedly driven out Arab residents, who fled into Turkey

Thousands of people fled from Syria to Turkey on Wednesday as moderate rebels and Kurdish forces fought Islamic State of Iraq and al-Sham (ISIS) insurgents holding the Syrian border town of Tel Abyad. Reuters reported that the refugees had entered Turkey through a makeshift border crossing overseen by Turkish gendarmerie officers, and that many of them were women and children. A Turkish official said 2,000 refugees were being registered on Wednesday after more than 6,800 were admitted in the area last week. He said they were fleeing advances by Kurdish YPG forces as well as aerial bombardment by the U.S. and Arab allies trying to help the Kurds push back ISIS.

ISIS last week launched an offensive on the provincial capital, the city of Hasaka, which is divided into zones run separately by the government of President Bashar Assad and a Kurdish administration. But Syria's Kurds have also sought to take advantage of Syria's complex war to expand their control over a region, stretching from Kobani to Qamishli, that they see as part of a future Kurdish state. Backed by U.S.-led coalition airstrikes, Kurdish YPG fighters in Syria have successfully pushed back ISIS militants from Kobani and scores of nearby villages. More recently, they have closed in on the ISIS-held town of Tal Abyad near the Turkish border. The town is ISIS's main access point to Turkey from Raqqa, the group's de facto capital in Syria.

Although the armed Kurdish factions are pushing back ISIS through partially allying moderate Syrian opposition groups, activists inside the region claim that Arabs are forced to leave their homes. The Kurdish advance into Tel Abyad forced the Arab residents of the town to leave their homes. Arab residents in northern Syria claim that Kurdish fighters do whatever they want and no force can stop them. The fate of the area is totally in the hands of the PYD and its armed wing, the YPG - both considered terror organizations for their direct links to the PKK.

Just as ISIS attracts foreign fighters from different parts of the world, Kurdish factions also draw from many Western fighters. The fight against ISIS has attracted dozens of Westerners, including a number of Iraq war veterans who have made their way back to the Middle East to join the Kurdish fighters, who have been mostly successful against the extremist group. Many are spurred on by Kurdish social media campaigners and a sense of duty rooted in the 2003 U.S.-led military invasion of Iraq. And while the U.S. and its coalition allies bomb the extremists from the air, Kurds say they hope more Westerners will join them on the ground to fight.

In March 2011, Syrians were emboldened enough to raise their voice against the dictatorship of Bashar Assad. However, the regime's response was not as peaceful as the protests, and the country was subsequently dragged into a deadly civil war after opposition groups took up arms against the government. The Syrian civil war has now entered its fifth year and has caused the deaths of more than 200,000 people with at least 60,000 missing. The war has also displaced nearly 10 million people. While international and regional powers continue endless discussions, it is reported that the Syrian regime continues to use chemical weapons. About 13.6 million people, equivalent to the population of London, have been displaced by conflicts in Syria and Iraq, many without food or shelter, the U.N. refugee agency revealed.
Last Update: Jun 12, 2015 3:30 pm
RELATED TOPICS