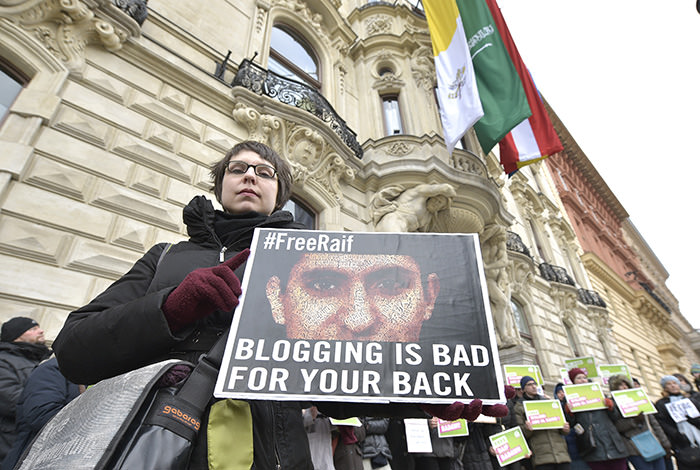 members of the Austrian Greens protest against the punishment for Saudi blogger Raif Badawi in front of the KAICIID in Vienna, Austria (AP Photo)
by Daily Sabah Jun 12, 2015 12:00 am
Saudi Arabian blogger, Raif Badawi, 31, has been in jail since 2012 for setting up a blog called "Saudi Arabian Liberals," where he hosts political and religious debates about secularism.

Originally in 2013, Badawi was sentenced to seven years and prison and 600 lashes. However, on appeal, the sentence was increased to ten years and 1,000 lashes as well as a $267,000 fine. On Monday, the Saudia Arabian Supreme Court upheld the charges.

Saudi Arabian authorities are due to issue him a round of 50 lashes any day, Human Rights Watch warned, a New York-based human rights organizations. In a statement released Thursday, HRW

He endured the first round of lashes in January earlier this year, The amount of rounds of lashes he is expected to face are 20, all in a space open to public viewing.

Saudi activists told HRW a wooden cane is used for the lashes, usually administered to the back and legs.

His second round of beatings have been postponed several times.
The sentencing and lashes have caused an international outcry, with western governments and human rights organizations calling for dropping of the charges.

A spokesperson for the Foreign Office in London said this week: "We are extremely concerned that Raif Badawi's sentence has been upheld … We have raised his case at the most senior levels in the government of Saudi Arabia and will continue to do so."
According to HRW, "Publicly lashing a peaceful activist merely for expressing his ideas sends an ugly message of intolerance."
Last Update: Jun 12, 2015 2:45 pm
RELATED TOPICS