UNICEF: More than 20 million in Yemen in dire need of aid 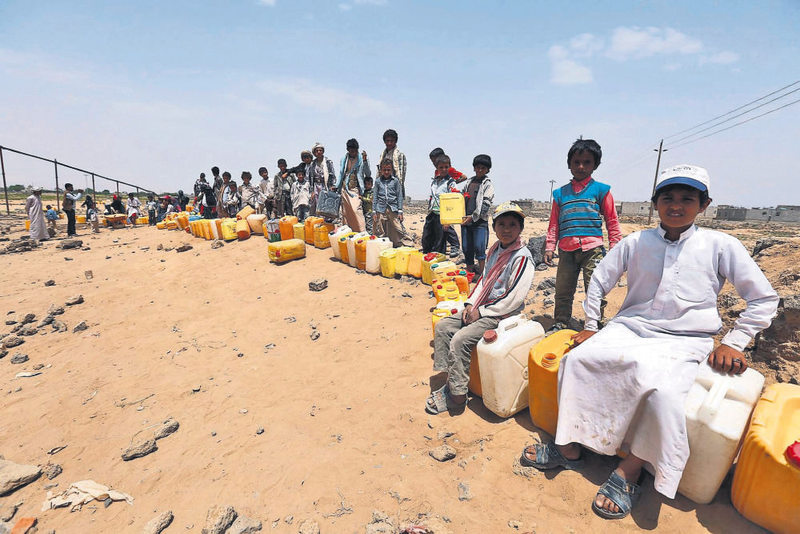 Yemeni children wait to fill jerry cans with water from a source donated by a benefactor amid ongoing disruption to water supplies in Sana'a on June 6.
by Daily Sabah with Wires Jun 12, 2015 12:00 am

As the number of Yemenis who are in need of assistance increases with more than 20 million people severely affected by the humanitarian crisis, the rights group called for a permanent cease-fire ahead of U.N.-sponsored talks

According to United Nations Children's Fund (UNICEF), 80 percent of the Yemeni population, or around 20 million people, have been affected by the fighting and are in need of aid. As the crisis continues in the country, the number of Yemenis who need humanitarian assistance has been steadily increasing. "20.4 million people are now estimated to be in need of some form of humanitarian assistance, of whom 9.3 million are children," Jeremy Hopkins, Deputy Representative of UNICEF, said from the capital, Sana'a. "The de facto blockade on Yemen's ports, though there is some easing, means fuel is not coming into the country, and since pumps are mechanized, that means over 20 million people don't have access to safe water," he added.

The medical charity Medecins Sans Frontiers (Doctors without Borders) has warned that the violence-hit city of Aden's health care system is collapsing because of the conflict. "Patients with chronic diseases cannot get their drugs, bodies are on the streets, and the city is an open dump with trash covering the streets," Hassan Boucenine, the group's head of mission in Yemen, said Thursday.

A coalition of 13 aid organizations has called for a permanent ceasefire in Yemen ahead of U.N.-sponsored talks Sunday on ending a conflict that has affected 80 percent of the population. The signatories of the statement also include Care, Oxfam, the Friedrich Ebert Foundation and the International Rescue Committee. "What Yemen urgently needs is a permanent ceasefire, an end to the Saudi-led commercial blockade," the groups said in a statement Thursday. They also called for "an end to arms transfers to those responsible for breaches of international humanitarian law, and a sizeable increase in humanitarian and longer term development funding." "Regardless of the outcome of the peace talks, the blockade needs to be immediately lifted and all obstacles hindering the provision of humanitarian aid and other essential commodities should be removed," said Priya Jacob, acting country director for Save the Children Yemen. "Otherwise more children will die from preventable diseases."

Meanwhile, the Saudi-led coalition on Friday mounted a series of airstrikes against Yemen's Iran-backed Houthi rebels in the capital, Sana'a, two days ahead of UN-brokered talks. The Saudi-led U.S.-backed alliance continues to pound Houthi targets as part of Operation Decisive Storm, which was launched on March 26, to halt the Houthis advance. The coalition includes Bahrain, Egypt, Jordan, Kuwait, Morocco, Qatar, Sudan, and the United Arab Emirates, who have conducted numerous airstrikes throughout Yemen against Houthi forces. Operation Decisive Storm ended on April 21 and immediately afterwards, Operation Restore Hope was launched by the Saudi-coalition. The intense fighting has come with a heavy toll on the civilian population amidst an already fragile humanitarian situation. At least 828 civilians have died as a result of the conflict, and more than 300,000 have been displaced, according to U.N. figures. More than 250,000 refugees in Yemen were caught up in the ongoing conflict, becoming victims of war.
Last Update: Jun 12, 2015 10:09 pm
RELATED TOPICS