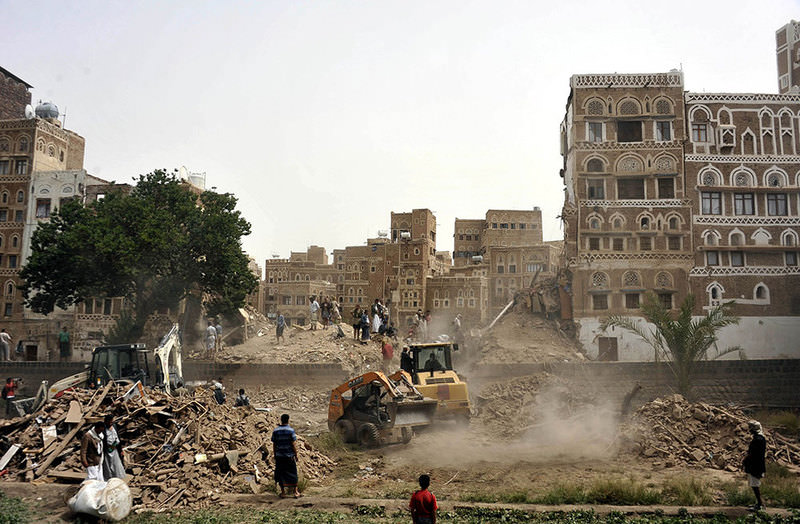 by Associated Press Jun 13, 2015 12:00 am
Saudi-led airstrikes targeting Shiite Houthi rebels and their allies in Yemen destroyed historic houses on Friday in the center of the capital, Sanaa, a UNESCO world heritage site. Rescue teams digging through the debris pulled the bodies of six civilians from under the rubble.

The bombing drew swift condemnation from the U.N. cultural agency, whose chief expressed sorrow at the loss of human life and the destruction of priceless architectural heritage.

Yemen's conflict has left millions of the Arab world's poorest nation in dire need of humanitarian assistance in just about everything from fuel to water, food, electricity and medical supplies as civilians are increasingly caught in the crossfire.

Also, early on Friday, random shelling killed 12 civilians in the southwestern city of Taiz, which witnessed some of the fiercest battles between rebels and southern fighters, witnesses and officials said.

In the Sanaa airstrikes, residents initially believed the warplanes had targeted a house occupied by a senior rebel commander, but officials and witnesses later said there were no Shiite rebels among the victims.

The impact of the missiles flattened at least three houses and caused cracks in surrounding buildings, which are cemented to one another, leaving large sections of the old city's district at the risk of collapse.

At a destroyed four-story building, an Associated Press reporter saw a pile of bricks, dust and wood mingled with clothes, kitchenware and water tanks, which are traditionally kept on roofs. An adjacent three-story building was split in half, wooden window frames dangling from the upper floors. Rescue workers were covered with dust as they searched for victims.

Most of the old city's three-to-four-story buildings had been emptied out weeks ago, as their residents left in fear of the airstrikes. The Saudi-led coalition launched the campaign in March, in an effort to halt the power grab by Yemen's Shiite rebels, known as Houthis. U.N.-brokered peace talks are due to start end of the week in Geneva in an attempt to end the conflict.

Mohammed al-Raddni, a neighbor whose grandfather lives next door to one of the destroyed buildings, said those killed in Friday's airstrikes included three women and two men, one of whom was a doctor. A 16-year-old teenager remains under the rubble, said al-Raddni.

"What do they want from us? This is unfair. Why don't they go search for Houthis somewhere else," shouted Zahwa Hammoud, an elderly woman dressed in traditional Yemeni clothing, as she looked at the damage.

Hammoud, one of few residents remaining in the neighborhood, said there was a "deafening sound that made me feel my ears exploding" when the missiles struck.

A police car with a loudspeaker urged residents to stay away from the rubble.

Online activists posted photographs of the damaged parts of the old city of Sanaa, known as al-Qasimi. The old city dates back 2,500 years and is one of the most popular and historic tourist attractions in the Yemeni capital, famous for its decorated buildings made of packed earth with burnt brick towers.

UNESCO's general director condemned the attack that targeted "the world's oldest jewels of Islamic urban landscape" and expressing sorrow for the loss of lives.

"I am shocked by the images of these magnificent many-storied tower-houses and serene gardens reduced to rubble," Irina Bokova said in the statement. She urged the warring parties to preserve the heritage of Yemen, which "bears the soul of the Yemeni people" and "belongs to all humankind."

UNESCO said that since the beginning of the conflict, several historic monuments across Yemen have suffered damage. It said that on June 9, the Ottoman era al-Owrdhi historical compound, outside the walls of Sanaa's old city, was severely damaged.

In recent days, airstrikes damaged an eight-century Great Dam of Marib, in eastern Yemen, as well as the ancient castle of al-Qahira in the southwestern city of Taiz and the Dhamar Museum, which houses thousands of artifacts, south of Sanaa, reported the state-run antiquities agency.

Arwa Osman, Yemen's former culture minister, said the damage to Sanaa's old city was "extremely painful." She told the AP that many of the archaeological sites were used by the Houthis and their allies as army barracks. The castle of al-Qahira was used by the Houthis to shell fighters in Taiz, she said.

"I can't blame one party but I blame all parties for causing so much damage to people and to our history," Osman added.

Other airstrikes on Friday targeted northern provinces of Saada and Amran, where the Houthis are in control, and Taiz the gateway to the southern port city of Aden.

Yemen's violence has killed 1,037 civilians, including 234 children, between mid-March and May. More than a million people have been displaced by the violence, according to U.N. estimates. World Health Organization last month put the death toll at more than 2,000, with 8,000 wounded including hundreds of women and children.

U.N. chief Ban Ki-moon is to hold meetings in Geneva with Yemen's warring factions and regional powers on Sunday, in what are expected to be first substantive talks by all parties involved in the conflict. The talks are expected to last two-three days.

The talks will start as proximity talks but the U.N. will seek to bring warring factions around the same table, according to Ahmad Fawzi, a U.N. spokesman.

Ban hopes the talks will produce a "new dynamic that will build confidence between" the factions, he said.