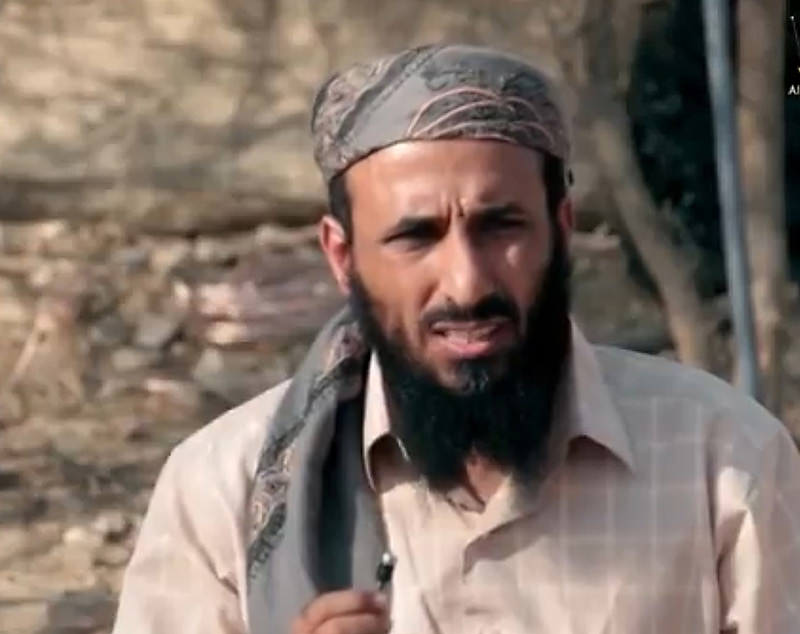 This file photo shows a still frame grab taken on April 16, 2014 from a video released on March 29, 2014 by Al-Malahem Media, the media arm of Al-Qaeda in the Arabian Peninsula (AQAP) (AP Photo)
by Daily Sabah with Agencies Jun 16, 2015 12:00 am
Al-Qaeda confirmed al-Wuhayshi, who is known as the terrorist group's number two leader and Yemen commander has been killed in a drone strike on Tuesday. The terrorist group confirmed the death in a video, while in a second video announced its military chief Qassem al-Rimi as the new leader in Yemen.

U.S. officials had earlier stated on Tuesday that they were trying to confirm al-Wuhayshi's death.

Nasir al-Wuhayshi's group, Al-Qaeda in the Arabian Peninsula, is behind several plots against the United States, including an attempt to blow up a U.S. commercial airliner on Christmas Day 2009, as well as the deadly attack on French magazine Charlie Hebdo in Paris earlier this year.
U.S. officials told The Washington Post they were reviewing intelligence linked to a June 9 drone strike that targeted Wuhayshi, who was also named Al-Qaeda's number two, and other operatives.

"We are looking to confirm his death," a U.S. intelligence official told the newspaper.

A local Yemeni official told AFP Tuesday that Wuhayshi is believed to have been killed in the raid in Al-Qaeda-held Mukalla, in southeastern Yemen, and that his body could be kept in a local morgue amid tight secrecy imposed by the militants.

"There are currently four bodies belonging to Al-Qaeda members. One of them is believed to be Wuhayshi's," the local official told AFP, requesting anonymity.

Global powers are keen for a speedy resolution of the conflict, fearing the growing power of Al-Qaeda in the Arabian Peninsula, the Yemeni branch of the jihadist network that has taken advantage of the chaos to seize territory.

Meanwhile the UN has described the country's humanitarian crisis as "catastrophic", with 80 percent of the population -- 20 million people -- in need of aid.

High-stakes talks were due to continue in Geneva Tuesday to try to end the bloody conflict.

"We do not have a moment to lose," UN Secretary-General Ban Ki-moon said on the first day of talks Monday, adding that the fighting was "giving strength to some of the world's most ruthless terrorist groups".

Ban said the violence had killed more than 2,600 people, half of them civilians.

"Today, Yemen's very existence hangs in the balance," Ban said. "While parties bicker, Yemen burns... The ticking clock is not a time piece, it is a time bomb."

He called for a fresh two-week humanitarian pause to get crucial supplies through, noting that Ramadan -- the Muslim holy month of fasting -- begins this week. But analysts said any chance of success at the first talks between the warring factions since Hadi fled Sanaa was "very unlikely". Yemen expert Laurent Bonnefoy added: "Indeed, each side appears to be inflexible, disinclined toward compromise".
Last Update: Jun 16, 2015 11:44 am
RELATED TOPICS