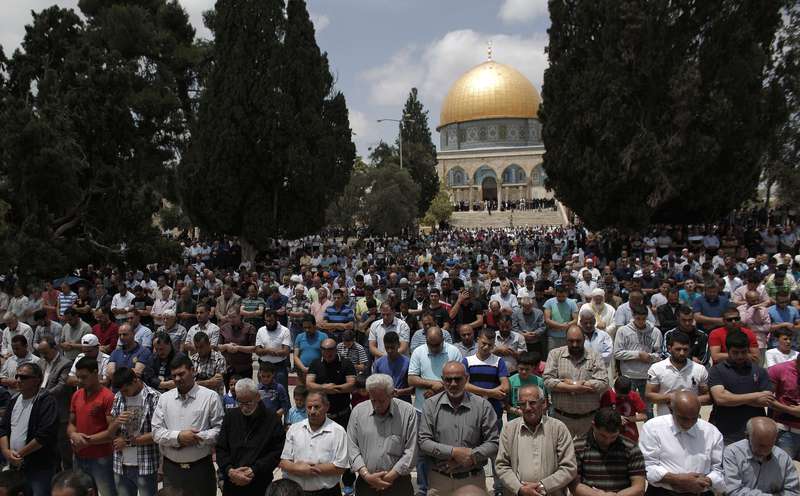 Palestinian worshippers take part in Friday prayers outside the Dome of the Rock at the Al-Aqsa mosque compound in the Old City of Jerusalem on May 22, 2015. (AFP Photo)
by Anadolu Agency Jun 16, 2015 12:00 am
Scores of Jewish settlers on Tuesday forced their way into the Al-Aqsa Mosque compound in occupied East Jerusalem, a Palestinian official said.

"Settlers toured the compound and tried to perform Talmudic rituals near the Dome of the Rock."

Al-Khatib added that the Muslim worshipers stood up to the settlers and shouted 'God is great,' forcing them to leave through al-Silsila gate.

Eyewitness told Anadolu Agency that Israeli police detained a Palestinian man and two women once the settlers left the compound.

For Muslims, Al-Aqsa represents the world's third holiest site. Jews, for their part, refer to the area as the Temple Mount, claiming it was the site of two Jewish temples in ancient times.

Israel occupied East Jerusalem during the 1967 Middle East War. It later annexed the holy city in 1980, claiming it as the capital of the self-proclaimed Jewish state in a move never recognized by the international community.

In September 2000, a visit to Al-Aqsa by controversial Israeli politician Ariel Sharon sparked what later became known as the Second Intifada, a popular uprising against Israel's decades-long occupation in which thousands of Palestinians were killed.
Last Update: Jun 16, 2015 5:49 pm
RELATED TOPICS