Court decision is neither independent nor lawful, Morsi’s son says 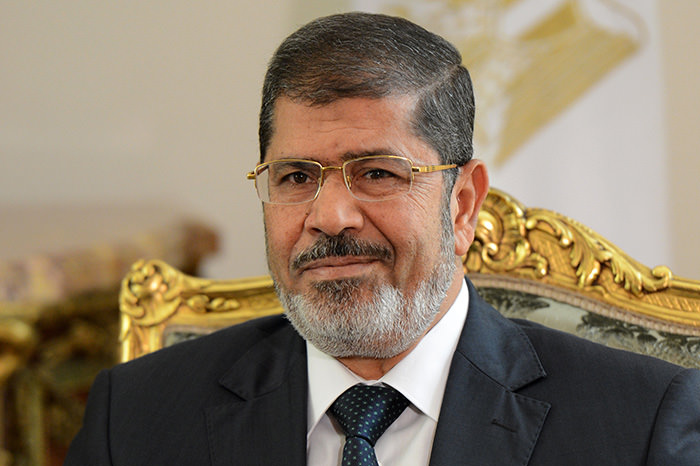 |AFP Photo
by Büşra Akın Dinçer Jun 17, 2015 12:00 am
An Egyptian court on Monday upheld both the life sentence and death sentence that were handed down last month to Egypt's first democratically elected president, Mohammed Morsi, who was toppled after a bloody military coup in July 2013 that was headed by current President Abdel-Fattah el-Sissi. Morsi, along with 105 other defendants, was given a life sentence for spying for foreign powers and was sentenced to death over a mass prison break during the incidents in 2011 during the ouster of former autocratic President Hosni Mubarak who ruled Egypt for 30 years.

The fairness and impartiality of the trial of Morsi and other Muslim Brotherhood members was suspicious, as many defendants said they were not allowed by the court to defend themselves. Even lawyers were banned from reaching their clients. In an interview with Daily Sabah two weeks ago, Morsi's lawyer Rodney Dixon said: "It wasn't a fair trial, it wasn't independent. There has been interference from the political authorities. We've got evidence of that, proof of that. The trial has not guaranteed his rights to fair legal representation and to present a defense," and voiced his concern that the decision would not be in line with justice.

Daily Sabah interviewed Mohammed Morsi's son, Osama Morsi, who shares similar concerns with Dixon. He claimed that the decision was unlawful and another step against his father by the coup administration.

Daily Sabah: What are your feelings about the verdict and what are you planning to do from now on?

Osama Morsi: Truly this political verdict is a continuation of the existing steps taken by the coup regime, which is trying hard to remove everything that represents a threat to it, internationally and among the Egyptian people, in order to defend its special self-interest, positions and even their necks. This is especially true after the massacres they committed and the blood they shed. The verdict is one of the regime's procedures executed through a kneeling judicial system that is not independent and is completely affiliated with the regime. The court is not authorized to look into those cases or trials concerning the president. Therefore, there is really nothing new in the Egyptian scene at all. It is only an attempt to alarm the men of the revolution on the ground or in jail to create the illusion that the regime is stable and strong. The history of all political verdicts around the world has proven to be null and collapsed. We are continuing on our route until the coup collapses. Our battle is not against a judge or an unauthorized court to try the president.

D.S.: Have you spoken to your father?

Morsi: I haven't spoken to my father today, but I met with him around a month ago after the judge transferred his case to the mufti's decision. In fact, his mental state is excellent and physical state is great. He understands the nature of the battle. He knows that this struggle confronts the attempts of the coup to settle and break the revolution. Therefore, he is committed to the path he started on and holds onto the same principles; his stance has not changed.

D.S.: What do you expect from the Muslim world?

Morsi: The truth is that the sentiment shared by Muslims around world is very positive and expresses awareness about public opinion in the Muslim world. Muslims in all capitals and cities in the Muslim world have rallied in support of the president and fellow activists. I actually expect more movement in support of the legitimate Egyptian president and his fellow activists against all unjust and unauthorized verdicts. The Islamist status is fine and the Islamists are forming coalitions in an attempt to embarrass and corner the coup in Egypt for its crimes. God willing, very soon we will see change on the horizon.