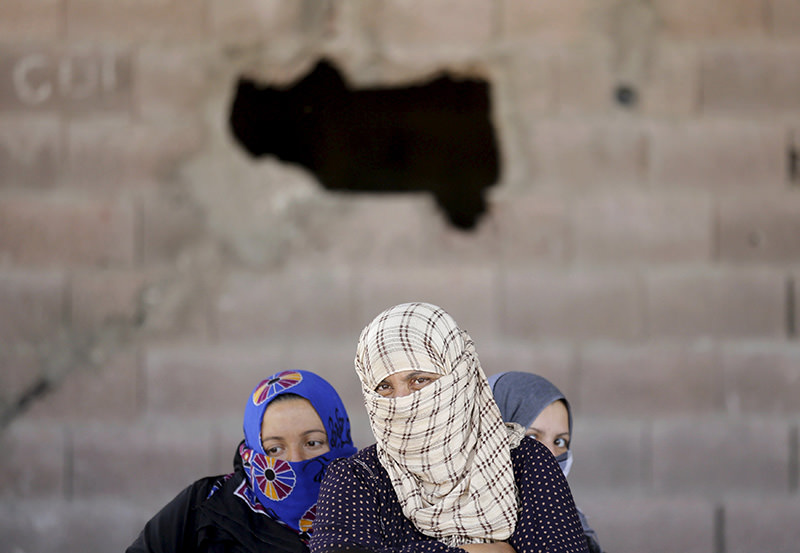 Syrian refugee women wait after crossing into Turkey at the Aku00e7akale border gate in u015eanlu0131urfa province, Turkey, June 16, 2015 (REUTERS photo)
by Daily Sabah with AFP Jun 17, 2015 12:00 am
Syrian refugees in Turkey began returning to their homes in Tal Abyad on Monday after Kurdish forces and Free Syrian Army fighters seized the border town in a major blow to the Islamic State of Iraq and al-Sham (ISIS).

The fight for the town prompted some 23,000 people to flee to Turkey, but on Wednesday the first returnees said they were eager to get back home. "I'm returning, I left my husband there. But I'm still very afraid of the bombs, how would someone not be afraid of bombs?" said Fahriye, a 40-year-old housewife. "I'm also afraid of ISIS coming back," she said. "I'll go and decide with my family whether we'll stay or not."

Mahmud, a farmer, said he too was eager to return home ahead of the Islamic holy month of Ramadan, which begins on Thursday in Syria. "We want to spend our holy Ramadan in our homeland. We have been looking forward to it," he said.

There have been signs that Kurdish forces have sought to bring together their cantons in Syria, Deputy Prime Minister Bülent Arınç said after a Cabinet meeting on Monday evening. His remarks came at a time when the Free Syrian Army and the PKK-linked PYD's YPG gained control of Tal Abyad. "This time the people of the bombed places were ethnically cleansed by the PYD and YGP as well as ISIS. These are strange relationships and alliances. We are seeing signs of work that is underway on a formula to bring together the cantons," Arınç said.

More than a dozen Syrian opposition groups on Monday urged the PYD in Syria to stop committing "ethnic cleansing" against Arabs and Turkmens in northern Syria.