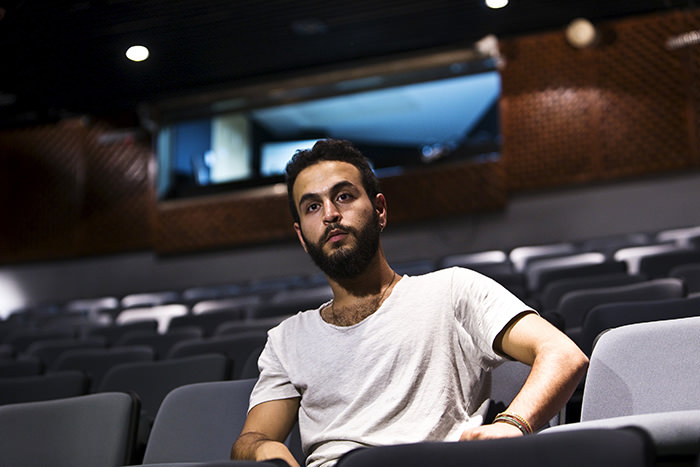 Bashar Murkus, author and director of 'A Parallel Time,, sits in Almidan theater during an interview, in the Israeli northern city of Haifa June 17, 2015 (Reuters Photo)
by Mehmet Çelik Jun 18, 2015 12:00 am

Israel's recently formed rightwing coalition government's Culture and Sport Minister Miri Regev has threatened the country's artists on Monday during her speech at Knesset, saying that those who expose the Palestinian struggle in their work will be monitored, including cutting state funding the artists could receive.

Regev's move came following the refusal by the Arab-Israeli actor Norman Issa to perform in Jordan Valley, a settlement in the occupied territories of the West Bank. Regev has said she will cut the funding to the Elmina Theater Company, in which Issa is one of the co-founders. Furthermore, funding for the Al-Midan Arab Theater in Haifa running the play, A Parallel Time, by an Arab playwright Bashar Murkus, was suspended. The play covers a real story of six prisoners in an Israeli jail, one of whom was convicted of killing an Israeli soldier, Haaretz reported. More than 1500 Israeli artists have signed a petition against Regev's crackdown on the artists and said they will go on a strike.

The hard-liner attitude by the Israeli politicians in the coalition government has gained pace particularly after the appointment of right-wing ministers to the cabinet by the Israeli Prime Minister Benjamin Netanyahu, most famously the Justice Minister Ayelet Shaked, who had called for killing of all the Palestinians last year on a post on Facebook, and recently called Israelis to boycott those who boycott Israelis. In addition, Shaked has proposed a new legislation which will monitor NGO's receiving international support and apply a high tax on the received funds. This, critics say, will lead to the closure of many NGO's and further isolate Israel on its claim to be a democratic state.

The new minister's uncompromising stance towards the artists and has also been criticized by the country's opposition, as well as the international community.

Opposition leader Isaac Herzog of the Zionist Union party harshly criticized Regev saying, "Regev is the cultural minister and doesn't need to continue using what she learned when she was the [IDF Spokesman]," and added that, "There's no reason for any artist to be threatened with defunding… just because they expressed their opinion in a democratic country," Jerusalem Post reported on June 15.

The Association for Civil Rights in Israel has criticized Regev in a letter sent to the minister of culture, insisting Regev to "refrain from becoming a cultural censor and warned that her behavior threatens Israel's democracy."

"In recent weeks, Israeli artists have felt threatened due to the sustained attack on their freedom of creation and freedom of expression. Though artists may stand at the forefront of this attack, the threat is to Israeli democracy as a whole," ACRI Chief Legal Counsel said.
Last Update: Jun 18, 2015 3:28 pm
RELATED TOPICS