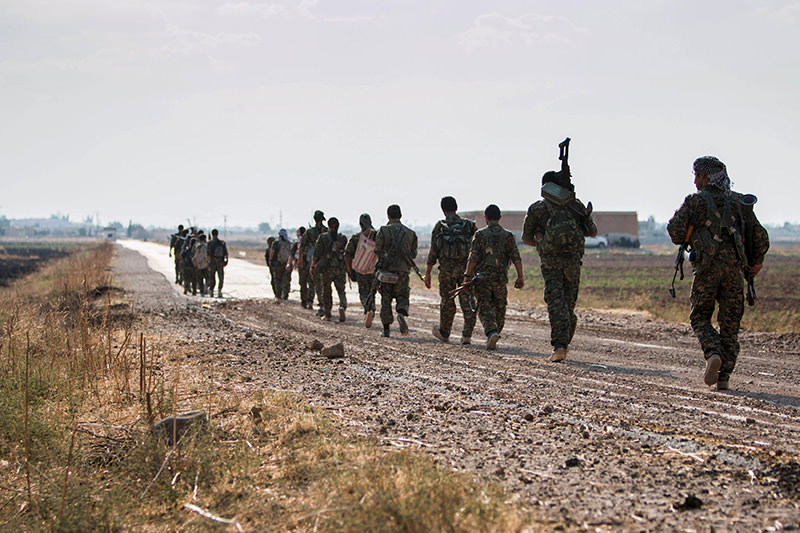 Syrian Kurdish YPG militia fighters walk carrying their weapons towards Tel Abyad of Raqqa governorate after they said they took control of the area from ISIS on June 15, 2015 (Reuters Photo)
by Yusuf Selman İnanç Jun 19, 2015 12:00 am

After seizing the town of Tel Abyad near the Turkish border, YPG fighters, who have been accused of ethnic cleansing, have reportedly been threatening local people with coalition strikes, a group of Syrian activists has claimed

The Democratic Union Party's (PYD) People's Protection Units (YPG) have been alleged to be systemically attacking Arab and Turkmen residents of Tel Abyad and setting dozens of villages into fire, Anadolu Agency reported based on a claim in a report, published by a group of Syrians. The group claimed that Kurdish fighters attack Arabs, confiscate property and force them to leave the towns that they capture. The expansion of Kurdish influence in Syria, however, comes at a price, according to various reports, which indicate that Arab and Turkmen populations in the regions have been targeted by the Kurdish forces.

One of these reports is the recently released 'Save Cezire canton from YPG' named campaign, according to which YPG militia have been appropriating Syrian Arabs' houses in El Haseke and placing others in them. One of the officials of the campaign, Ali el-Haris told Anadolu Agency reporter: "There have been many violations in El Haseke's suburbs. Rasulayn village, its rural areas, and southwestern areas have been evacuated." Haris claimed that YPG militia has joined forces with the Syrian regime and massacred the people in the regions they have occupied. He said, "YPG forces are threatening the people with giving their villages' coordination to U.S.-led coalition for their bombardment in case the villagers resist against them."

According to the report, 60 people have been killed, and 80 houses have been burned down in YPG's 22 February 22, 2014 dated attacks in El Haseke's villages. The report has also claimed that tens of people from the Tel Berrak village, among which were children and women, have been put into YPG prisons, under allegations that they were ISIS militants. Among these, five have died in the prison, according to the report. Also, Tel Hamis district's Arab villages have suffered various attacks in YPG's March 2014 operation, the report said. In these attacks, the houses have been reportedly plundered, and the people trying to flee have been shot down.

After Islamic State of Iraq and al-Sham (ISIS) militants lost the battle in Tal Abyad against the PKK-linked PYD and its armed wing, the People's Protection Unit (YPG), ISIS has intensified attacks on Azaz, which is near the Turkish border and controlled by the Free Syrian Army FSA. Azaz is strategically important for moderate rebel groups for keeping the supply line with Aleppo and Idlib alive. If it is captured by ISIS, the rebels will have received a blow to their recent advances both in Idlib and in Aleppo's north.

Although the U.S.-led anti-ISIS coalition has conducted aerial attacks on the militant group in Raqqa and Tal Abyad, there has been no attack near Azaz. FSA brigades that were pushed back had to retreat as ISIS militants were eagerly fighting after fleeing from Tal Abyad. Some pro-FSA activists on Twitter asked why the U.S. has not hit ISIS targets near Azaz. Some activists shared posts saying that the U.S. does not launch airstrikes when the FSA fights ISIS but immediately hits the targets if the YPG is battling ISIS.

While the battles have intensified, Turkey is preparing for a new wave of refugees, as thousands may flee if ISIS captures Azaz. Turkey is also concerned about the YPG's advance in the region, as a new de facto Kurdish state may be created by the PKK and its Syrian branch. Turkey considers the two groups a national security threat. Turkey accepted thousands of refugees after the YPG captured Tal Abyad. According to activists reporting from close to the border, the YPG is blocking the return of refugees to Tal Abyad. However, some pro-YPG sources claimed that Kurdish fighters welcomed the local people.

A refugee who fled to Turkey from Tal Abyad said, "The bombing was very intense. I was scared that a blockade might be established, or that the YPG might kick us out or might accuse us of supporting ISIS. I read many news reports that documented systematic ethnic cleansing campaigns against Arabs in the areas now controlled by the YPG." Many other comments from different refugees have been reported by several media outlets as well.

As part of its Syrian policy, the U.S. directly supports the armed Kurdish factions. U.S. officials consider as the PYD and the YPG battle against ISIS as legitimate, even though the PYD is the Syrian affiliate of the PKK, which is on the terror list of many countries, including the U.S., EU and Turkey. The PKK has engaged in a long war against Turkey with the aim of separating Turkey's southeast to establish an independent Kurdistan that will contain Kurdish areas in Syria, Iraq and Iran. Turkey began a reconciliation process by investing in the area and presenting democratization packages.

Despite the ongoing peaceful era, which has recently run into trouble with the PKK organizing violent protests and killing innocent people, Turkey considers the PKK and its factions as a threat, and demands its allies regard the concerns of the organization.
Kurds have become a significant part of the war and gained the capability to change the balance of the war after Kobani, a Kurdish town, was besieged by ISIS last year. Unified Kurdish factions defeated the militant group. The PYD, which allied with the Syrian regime and opposes the Syrian revolution, has begun allying with some local armed groups loyal to the FSA.

*Didem Atakan contributed to the report