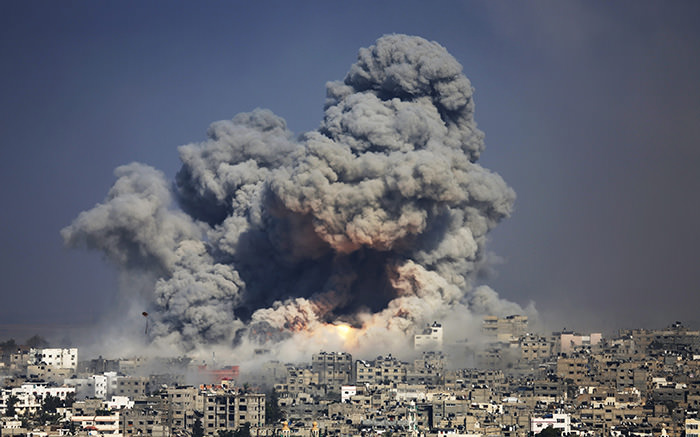 Smoke and fire from an Israeli strike rise over Gaza City, July 29, 2014 (AP Photo)
by Daily Sabah with DPA Jun 22, 2015 12:00 am
Israeli armed forces and Palestinian militants attacked civilians indiscriminately during their conflict last year, which may constitute war crimes on both sides, a UN inquiry commission said on Monday.

In their report to the UN Human Rights Council, the commission's experts criticized Israel for continuing its attacks in the Gaza Strip even after it had become apparent that its tactics were taking a heavy toll on civilians.

This raises the question of whether Israeli political and military leaders violated international humanitarian law that governs the conduct of war, the report said.

The commission did not make definite pronouncements on whether crimes were committed, leaving such judgements to courts or other legal mechanisms.

Israel's Foreign Ministry spokesman Emmuel Nachshon slammed the report saying, "it is well known that the entire process that led to the production of this report was politically-motivated and morally-flawed from the outset. Just as Israel seriously considered every complaint, no matter its origin," Jerusalem Post reported.

"It is regrettable that the report fails to recognize the profound difference between Israel's moral behavior during Operation Protective Edge and the terror organizations it confronted," he said.

"The 2014 hostilities saw a huge increase in firepower used in Gaza, with more than 6,000 airstrikes by Israel and approximately 50,000 tank and artillery shells fired. In the 51 day operation, 1,462 Palestinian civilians were killed, a third of them children. Palestinian armed groups fired 4,881 rockets and 1,753 mortars towards Israel in July and August 2014, killing 6 civilians and injuring at least 1,600," the UN report said.
Last Update: Jun 22, 2015 3:51 pm
RELATED TOPICS