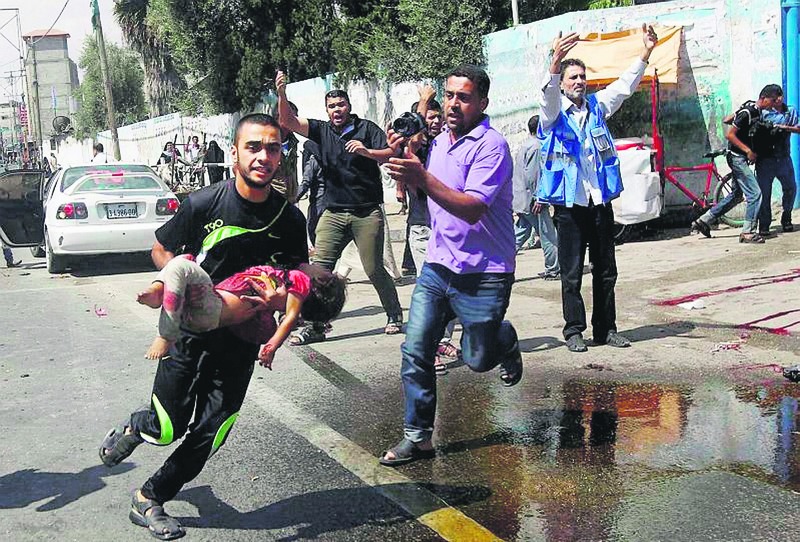 A Palestinian man carries a child to hospital after Israeli airstrikes hit a civilian area in Gaza last summer.
by Cihangir Yıldırım Jun 23, 2015 12:00 am

A report released by an independent U.N. commission of inquiry on Israeli aggression on the Gaza Strip last summer that left more than 2,000 dead, finds Israel deliberately targeted civilians

An independent U.N. commission of inquiry released its report on Israel's 2014 Operation Protective Edge finding evidence that Israel committed war crimes during the war in the Gaza Strip in 2014. The report could serve as a road map for the preliminary examination already underway by the International Criminal Court's prosecutor.

Israel faces charges that it potentially breached international law in multiple areas of the conduct of its war, including the targeting of residential homes with precision, the excessive use of artillery in civilian areas and the loosening of rules of engagement.

The report calls on Israel to provide further details of its "targeting decisions."

The report accuses both Hamas and Israel of breaches of international law in the way they fought the conflict. The U.N. commission said it gathered "substantial information pointing to serious violations of international humanitarian law and international human rights law" by both sides. The 271-page report says that both Palestinian armed groups and Israel are responsible for violations of international law that could amount to war crimes. The report says there was a huge increase in firepower during the conflict in 2014 with over 6,000 airstrikes carried out by the Israeli Defense Forces (IDF) and about 50,000 tank and artillery shells fired. Palestinian armed groups also reportedly fired 4,881 rockets and 1,753 mostly homemade mortars toward Israel between July and August 2014. The commission of inquiry's chairwoman, U.S. jurist Mary McGowan Davis, said at a Geneva news conference that the investigation had gathered testimony "in scrupulously objective fashion." Also McGowan Davis said leaders should have been aware as the war progressed that the failure to change course was leading to mounting civilian casualties. The report says that those responsible for suspected violations of international law at all levels of the political and military establishments must be brought to justice.

Hamas welcomed the U.N. commission's report for highlighting the grave human rights violations of Israel. "The clear condemnation in the U.N. report requires the referral of Israeli government officials to the International Criminal Court [ICC] and other international courts that are assigned to try those who commit crimes against our people," Hamas said in a written statement.

Over the report, Israeli Prime Minister Binyamin Netanyahu denied Israel's committing war crimes. "Israel is defending itself from a murderous terrorist organization that calls for its destruction and which has perpetrated many war crimes, any country that wants to live would have acted this way. But the commission expects a country, the citizens of which have been attacked by thousands of missiles, to sit idly by. We will not sit, and have not sat. We will continue to take strong and determined action against all those who try to attack us and our citizens, and we will do so in accordance with international law. The report is biased. The commission that wrote it is under a committee that does everything but protect human rights," Netanyahu said. The reaction to the report embodied Israel's mounting attacks on the U.N. in recent months, with the Israeli ambassador to the United Nations, Ron Prosor, saying "the U.N. has been taken hostage by terrorist organizations, and it is a battle the international community will lose."

The Israeli government released a report on the Gaza conflict two weeks ago claiming that no civilian was targeted during the strikes. Regarding the attacks on Gaza, which drew harsh criticism from several international and regional actors, the Israeli government's report accused Hamas, which runs Gaza, saying: "The 2014 Gaza Conflict was another peak of hostilities in the ongoing armed conflict that has been waged against Israel for well over a decade by terrorist organizations operating from the Gaza Strip." In response to why civilians died in the attacks, the report acquitted the IDF and said: "First, the conflict occurred primarily in an urban environment. Hamas combat manuals and training materials recovered by IDF in the Gaza Strip demonstrate that Hamas's strategy was to deliberately draw the hostilities into the urban terrain and to use built-up areas and the presence of the civilian population for tactical advantage and political gain. This strategy was obvious during the 2014 Gaza Conflict in view of the sheer scope of military activity that Hamas and other terrorist organizations embedded within the urban environment. … Much of what may have appeared to external parties to be indiscriminate harm to civilians or purely civilian objects were in fact legitimate attacks against military targets that merely appear civilian, but were actually part of the military operations of these terrorist organizations," it said. Civilians were also harmed as a result of "unfortunate, yet lawful, incidental effects of legitimate military action in the vicinity of civilians and their surroundings," it added. The timing of the report was not coincidental as Reuters reported: "The 277-page report, which cited Israel's internal probes and statements from Western leaders backing its right to self-defense, suggested the Netanyahu government hoped to defuse criticism from the U.N. Human Rights Council [UNHRC] inquiry in advance. Deeming the UNHRC biased, Israel boycotted its investigators as it did those from the council who looked into its 2008-09 Gaza offensive. That UNHRC inquiry accused Israel of war crimes."

The report also highlighted that hundreds of people were killed and thousands of homes were destroyed or damaged during the Israeli ground offensive in Gaza that began in mid-July 2014. "There was an explosion about every 10 seconds," the report quoted a witness in Rafah as saying. According to a report by the Gaza Health Ministry (GHM), 17,200 houses, 73 mosques and 24 schools were destroyed by Israeli forces.

Also according to a UNICEF report, the 52-day conflict in Gaza last year saw 564 children killed along with 2,956 Palestinians who now struggle with trauma and life-long disabilities. The Palestinian Liberation Organization (PLO) reported that 1,226 Palestinian's under the age of 15 were taken into custody by Israeli forces.
Last Update: Jun 23, 2015 7:49 pm
RELATED TOPICS