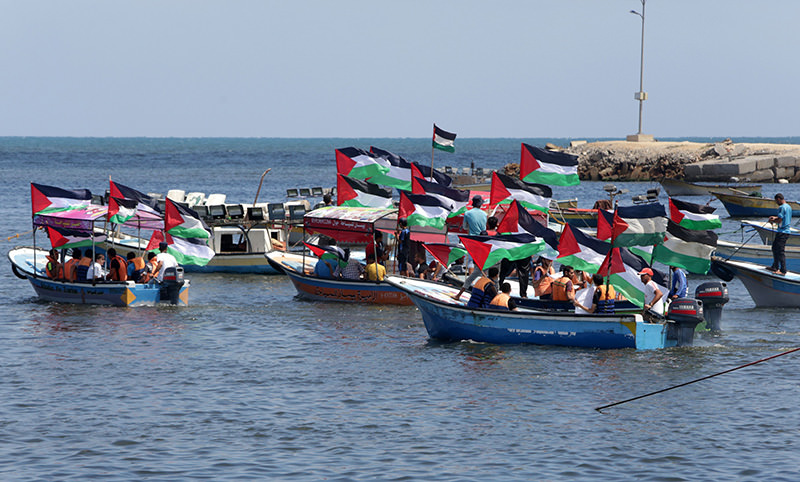 Palestinians hold their national flag to show support for activists aboard a flotilla of boats who are soon to set sail for Gaza at the seaport of Gaza City on June 24, 2015 (AFP Photo)
by Anadolu Agency Jun 24, 2015 12:00 am
A left-wing political group at the European Parliament has started a petition among parliamentarians to end the blockade of Gaza, as the third Freedom Flotilla is currently on its way to deliver humanitarian aid to Gaza citizens.

"Within the last eight years Gaza has been subjected to three large military onslaughts by Israel," Martina Anderson, Member of the European Parliament for the Nordic Green Left, told a news conference in Brussels on Wednesday.

"The Gaza strip has some of the most densely populated urban areas; it is blockaded by land air and sea by Israel," Anderson said. "There is little wonder why Gaza is described as the world's largest open air prison."

The Nordic Green Left group is circulating a petition among parliamentarians, from which it has gathered over 100 signatures to demand that Israel ends the blockade of the Gaza Strip.

Since 2007, Israel has imposed a strict naval blockade on the Gaza Strip. The 1.8 million inhabitants of the Palestinian city have been deprived of many of their most basic needs under the near decade-long blockade.

The first "Gaza Freedom Flotilla" expedition in May 2010 ended in tragedy after Israeli commandos killed nine Turkish nationals and an American of Turkish origin in a raid on the flotilla ship, Mavi Marmara. Another person died in a Turkish hospital in 2014 after being in coma for almost four years.

The second freedom flotilla set sail in 2012, but it too was turned back.