Gazans banned from praying at Al-Aqsa next Friday 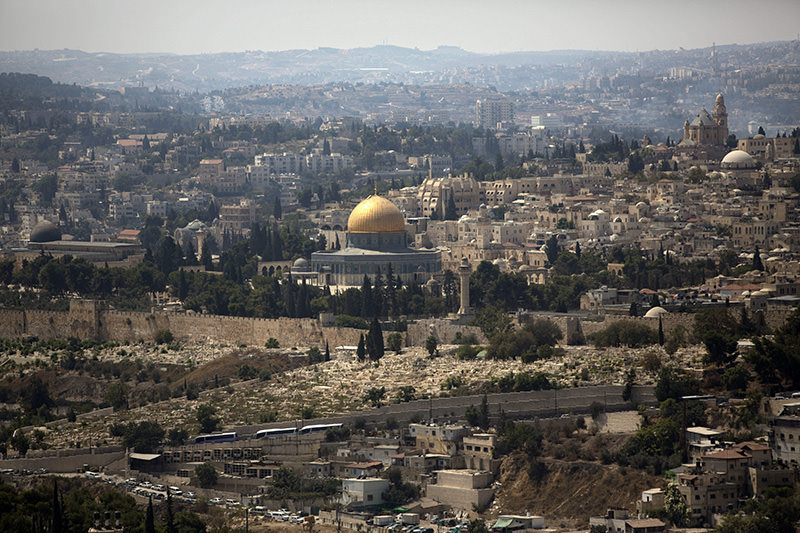 In this Monday, Sept. 9, 2013 File Photo, the dome of the rock mosque in the Al-Aqsa Mosque compound is seen in Jerusalemu2019s Old City(AP Photo)
by Anadolu Agency Jun 24, 2015 12:00 am
Israel has prohibited residents of the blockaded Gaza Strip from visiting East Jerusalem's Al-Aqsa Mosque next Friday as a response to the reported launch of a rocket on Tuesday into southern Israel, an Israeli official has said.

"Due to the launch of a rocket towards Israel on Tuesday, worshipers from Gaza will be prohibited from praying at the Al-Aqsa Mosque next Friday for security reasons," Israeli army spokesman Avichay Adraee said.

On Tuesday, Adraee announced that an artillery shell -- which, he said, had been fired from the Gaza Strip -- had fallen to earth in an agricultural collective located in southern Israel.

The shell, he added, had failed to cause any casualties or material damage.

Mohamed Fayyoumi, a 66-year-old Gaza resident, told Anadolu Agency that he had planned to pray at the iconic mosque next Friday but had since been informed of the ban on visits by Gaza residents.

"I was told hours ago that we're not allowed to visit Al-Aqsa because of the launch of the rocket into Israel," he said.

"I haven't visited Jerusalem in 20 years," Fayyoumi lamented. "I'm very sad and disappointed that I won't be able to pray at Al-Aqsa."

But while residents of the Gaza Strip will be banned from visiting the iconic mosque, thousands of Palestinians from the occupied West Bank plan to march to Al-Aqsa to mark the second Friday of the holy month of Ramadan.

Sheikh Azzam al-Khatib, director-general of Islamic endowments and Al-Aqsa affairs, told Anadolu Agency that more than 250,000 Palestinian worshipers from the West Bank and Israel were expected to converge on Al-Aqsa next Friday.

"Tents, water and food will be made available to worshipers inside the mosque complex," he said.

Israel occupied East Jerusalem and the West Bank during the 1967 Middle East War. It later annexed the holy city in 1980, claiming it as the unified capital of the self-proclaimed Jewish state -- a move never recognized by the international community.

Sacred to both Muslims and Jews, Jerusalem is home to the Al-Aqsa Mosque, which for Muslims represents the world's third holiest site. Jews, for their part, refer to the area as the "Temple Mount", claiming it was the site of two prominent Jewish temples in ancient times.