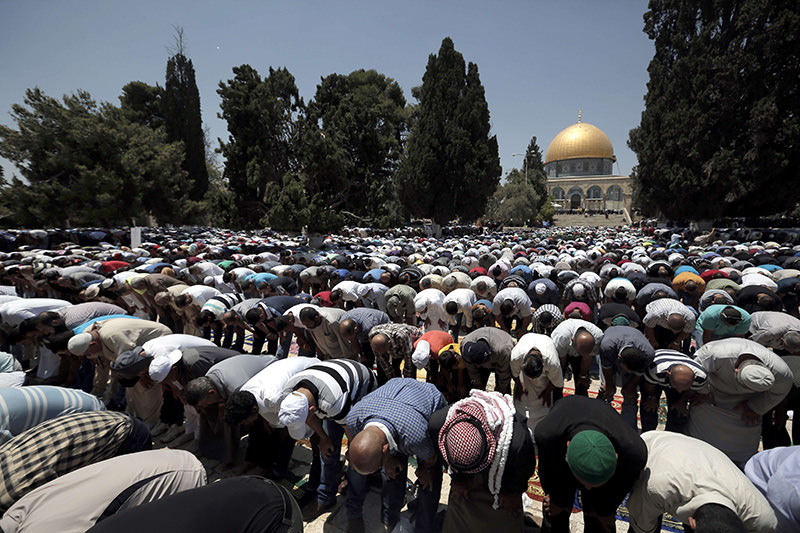 Palestinian worshipers pray outside the Dome of the Rock at the Al-Aqsa Mosque compound in Jerusalem during the third Friday prayers of the Muslim holy fasting month of Ramadan on July 3, 2015 (AFP Photo)
by Anadolu Agency Jul 03, 2015 12:00 am
Thousands of Palestinians from the occupied West Bank and East Jerusalem marched to Al-Aqsa Mosque to pray the third Friday prayer of the holy month of Ramadan.

Men over 50, children under 12 and women over 30 were allowed by the Israeli army to enter occupied East Jerusalem without permits.

Israeli authorities stepped up security measures around the flashpoint mosque, deploying 2,000 Israeli troops and erecting roadblocks at the entrances of Jerusalem's Old City.

Jameel Abu Rob, 20, from the West Bank city of Ramallah told Anadolu Agency that he jumped over the separation wall, which is 6 meters high, to pray at al-Aqsa.

"It is a serious risk," Abu Rob said. "You can get shot, but the feeling that you are praying among tens of thousands of Muslim people at Al-Aqsa Mosque cannot be described."

Abu Rob said he hopes he does not get caught by the Israeli army on his way back home.

Sheikh Azzam al-Khatib, director-general of Muslim Endowments and Al-Aqsa Affairs, told Anadolu Agency that around 230,000 worshipers prayed at Al-Aqsa on the third Friday of Ramadan.

He said the endowments deployed hundreds of umbrellas for the worshipers who would to stay for Taraweeh prayer.

"We expected more than 350,000 worshipers to visit al-Aqsa this Friday, however, Israeli restrictions prevented that," Khatib added.

Israel had allowed around 500 Palestinians from the blockaded Gaza Strip to pray at Al-Aqsa this Friday after prohibiting them last week in response to a rocket attack on southern Israel.

Israel occupied East Jerusalem and the West Bank during the 1967 Middle East War. It later annexed the city in 1980, claiming it as the unified capital of the self-proclaimed Jewish state-a move never recognized by the international community.

"No one told me that I will be visiting East Jerusalem and praying at Al-Aqsa Mosque until yesterday evening," Haleema Maghseeb, 62, from the city of Der Al-Balah in the Gaza Strip, told Anadolu Agency.

She wiped the tears and said, "I will not stop reading Quran and praying to Allah to help my Palestinian people in Gaza and anywhere else."
"It is the first time I pray at Al-Aqsa in 27 years and I hope I would see it again one more time before I die," she added.