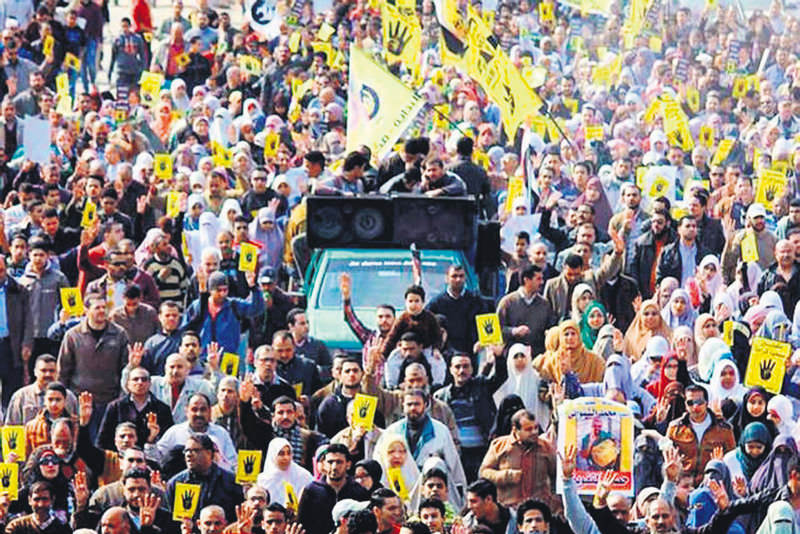 Two years ago, the Egyptian army took over power while mass crowds were asking the government to resign and other mass crowds were on the streets to back the Muslim Brotherhood. Things have changed in the country so rapidly and military has taken over power completely, arrested former cabinet members, shut down political parties and finally replaced the president. The explicitly Gulf-supported coup changed the country's fate and put a huge obstacle on its path to democracy. Egypt, which was expected to gain stability and end autocratic presidential eras, has become one of the worst countries in terms of human right violations.

Islamic State of Iraq and al-Sham- (ISIS) affiliated militants on Wednesday carried out deadly attacks on Egyptian security forces leaving more than 60 dead and dozens wounded. The Egyptian army launched a massive operation in Sinai to hunt the militants and killed at least 100, according to local sources. However, Egyptian security forces also targeted the Muslim Brotherhood movement that was outlawed after the military coup, which overthrew Egypt's first democratically elected president, Mohammed Morsi, in 2013, under the leadership of the incumbent President Abdel-Fattah el-Sissi. The police raid killed 13 of the movement's leaders who were in a house to organize the delivery of aid to the detained Muslim Brotherhood members' families.

However, the Muslim Brotherhood has always denied relations with militant groups, as radicals consider the movement members heretics due to ideological disputes. The Egyptian government accuses the Muslim Brotherhood of both allying with ISIS-affiliated militants in Sinai and Hamas, the ruler of the Gaza Strip. Yet the government ignores that ISIS threatened Hamas to attack Gaza as well. ISIS militants in a video said Hamas rule is insufficiently stringent about religious enforcement. "We will uproot the state of the Jews [Israel] and you and Fatah, and all of the secularists are nothing, and you will be overrun by our creeping multitudes," a masked ISIS militant said. "The rule of sharia will be implemented in Gaza, in spite of you. We swear that what is happening in the Levant today, and in particular the Yarmouk camp, will happen in Gaza," he said, referring to the group's advances in Syria and threatening Hamas with attacking Gaza. 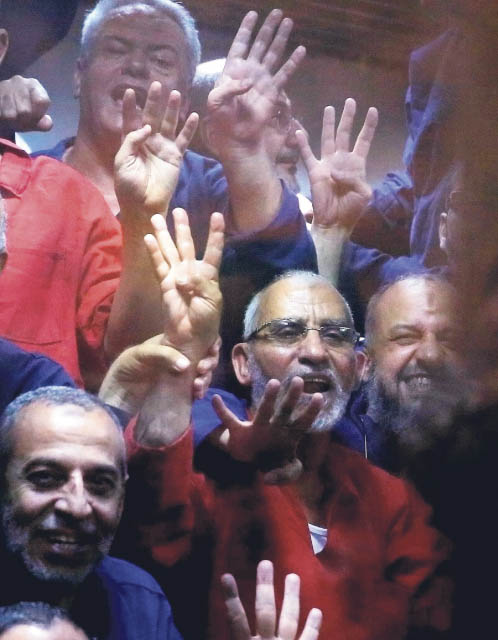 Senior members of the Muslim Brotherhood, make a four-fingered gesture in a court referring to the 2013 killing of pro-Morsi protesters at the Rabaah Al-Adawiya mosque.

Former minister of planning and international cooperation, Amr Derrac, told Daily Sabah: "The regime has been increasing pressure on us. They are detaining people arbitrarily, killing and raping women, torturing in prisons to death. But nothing can make us take up weapons. We know that violence makes everything worse." He underlined the jeopardy that someone who faced oppression may apply to violence but said the Muslim Brotherhood cannot control these kind of individual acts.

Hashmat denied the claims of Egyptian regime on the so-called relation between the Muslim Brotherhood and militants in Sinai and said this is a pretext, used by the regime to oppress us. Derrac said: "The militants and the Muslim Brotherhood are enemies of each other. For them, there is no difference between Morsi and Sissi. They do not believe democracy and accuse us for pursuing a democratic system. Cooperation or coordination is impossible." He claimed that the regime will implement the executions of Morsi and others, and are therefore creating pretexts.

In response to the killing of 13 leaders and tough statements, the Muslim Brotherhood released a statement late on Wednesday calling for resistance against the regime. "The Muslim Brotherhood asserts that the assassination of its leaders is a turning point that will have its own repercussions by way of which the criminal Abdel-Fattah el-Sissi is initiating a new phase during which it will not be possible to control the anger of the oppressed sectors who will not accept to be killed in their own houses and in the middle of their families," the statement said. Condemning the attacks on Egyptian security forces in Sinai, they stated that "While asserting its rejection of the killing and violence in Sinai and in other places, the Muslim Brotherhood is holding the criminal Abdel-Fattah el-Sissi and his gangs responsible for the repercussions of these crimes," it said. The statement also called on the Egyptian people to "come out in rebellion and in defense of your country, yourselves, and your children."

The Muslim Brotherhood was the largest political movement in Egypt and was delivering aid, social services and education facilities across the country with a moderate Islamist ideology, seeking to end poverty, impoverishment, foreign intervention, unemployment, social problems and corruption. Since the first day of its establishment in 1928 by Hassan al-Benna, who was killed in 1949, the group never resorted to violence but preferred to remain in legal politics and separated itself from radical groups that adopted the Salafist and Wahhabi understanding of Islam like al-Qaida. The Muslim Brotherhood was familiar with politics, as it was struggling to grab seats in parliament in the Mubarak era. The group entered parliamentary elections and presidential elections. The popularity, reliability and statements brought Muslim Brotherhood-supported Morsi to power after he received a little more than 50 percent of the votes.

After Sissi took power, the international community voiced its concern weakly against the human rights violations, mass death sentences, arbitrary detentions and the suppression of all opposition groups by the Sissi rule, despite the repeated warnings of rights groups. Moreover, the United States did not condemn the mass killings of people in Egypt as happened in Rabaa Square in 2013. The systematic and widespread killing of at least 817 demonstrators by Egyptian security forces in July and August 2013 probably amounts to crimes against humanity, Human Rights Watch (HRW) said in a report, released last August. "In Rabaa Square, Egyptian security forces carried out one of the world's largest killings of demonstrators in a single day in recent history," said Kenneth Roth, executive director of HRW. The Cairo administration shook the world frequently last year as Egyptian courts sentenced hundreds of people to death and to life in prison. A recent report by the Egyptian Center for Economic and Social Rights, a local non-governmental organization, said that more than 41,000 Egyptians had been subject to prosecution since Morsi's ouster.
Last Update: Jul 03, 2015 8:31 pm
RELATED TOPICS