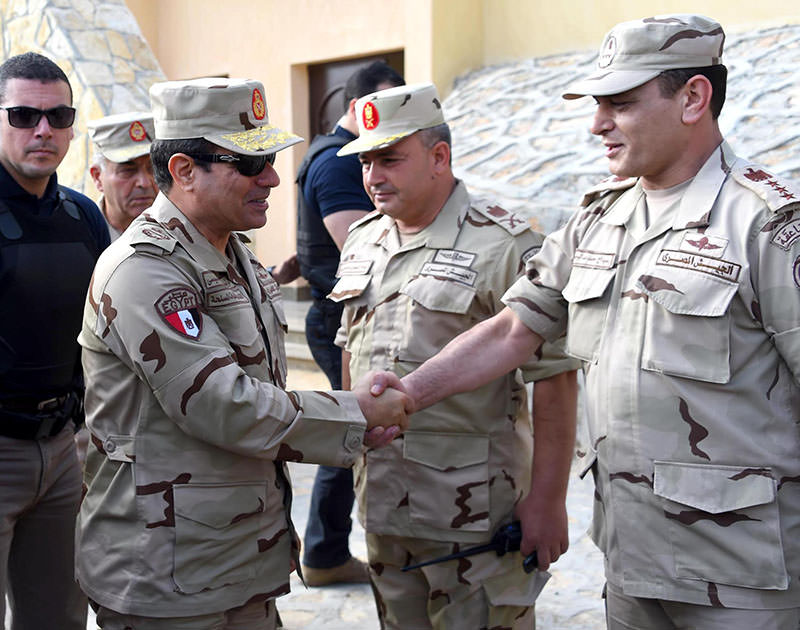 This week's assassination of state prosecutor Hisham Barakat in a Cairo car bombing followed by spectacular ISIS attacks that killed dozens in the Sinai have underlined the lack of security and stability despite a wide-ranging crackdown.

Hundreds have been killed, tens of thousands detained and hundreds more sentenced to death after speedy trials in the crackdown on Morsi supporters.

Morsi and several leaders of his Muslim Brotherhood movement have been handed the death penalty.

On Friday, a demonstrator was killed by birdshot as police dispersed pro-Morsi protesters in southern Cairo, officials said.

On Wednesday, the military deployed F-16 warplanes to bombard ISIS militants who battled troops in a North Sinai town after having launched a surprise dawn attack on several army checkpoints.

Dozens were killed in what was ISIS's boldest attack yet in the strife-torn Sinai, with militants taking over rooftops and firing rockets at troops.

The army said in a video of the attack that militants had planted ISIS flags on some buildings to "show that the terrorists had taken over the town", but their attempt was thwarted.

On Friday, the "Sinai Province", Egypt's ISIS affiliate, said in a statement posted on Twitter that it had hit more than 20 army checkpoints.

The army video disputed this, saying 10 checkpoints were attacked.

"There is a complete political failure at all levels amid a return of repression, arbitrary arrests and killings," said activist Mohamed Nabil from the April 6 youth movement that spearheaded the 2011 uprising against President Hosni Mubarak.

The crackdown rapidly expanded to include jailing secular activists who had not only revolted against Mubarak but backed Sissi in ousting Morsi.

Rights groups accuse the authorities of using the judiciary to suppress dissent.

"The Egyptian authorities have shown that they will stop at nothing in their attempts to crush all challenges to their authority," said Hassiba Hadj Sahraoui of Amnesty International.

Barakat's murder and Wednesday's ISIS attacks infuriated Sissi, who called for fast-track executions of those on death row.

On Wednesday, the cabinet passed an anti-terror law to "achieve swift justice and revenge for our martyrs".

Analysts said the government sees most opponents as supporters of the now blacklisted Brotherhood.

"And because many Egyptians are weary of political tumult and frightened by an upsurge of terrorist attacks within Egypt's major cities, they are largely supportive of this crackdown," said Eric Trager of the Washington Institute for Near East Policy think-tank.

Sissi's other major challenge is the economy.

His government's aim is to achieve annual gross domestic product (GDP) growth of seven percent for an economy traditionally driven by tourism.

The sector has plummeted, however, with last year's 10 million visitors sharply down on 2010 when 15 million tourists were lured by Egypt's archaeological sites and Red Sea resorts.

Signs of a recovery are visible, but economists said a fundamental change in government thinking is needed.

Sissi hosted an international conference in March that attracted investment pledges of more than $36 billion.

He is also banking on a $9-billion Suez canal expansion project due to be inaugurated on August 6.