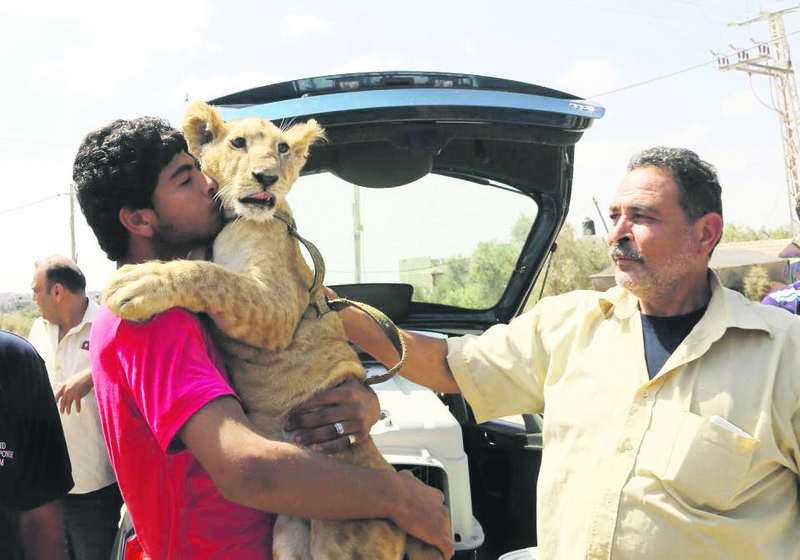 by Associated Press Jul 06, 2015 12:00 am
Hamas rulers on Friday allowed a pair of lion cubs en route to a wildlife sanctuary in Jordan back into the Palestinian coastal strip after the animals and their entourage had been stuck for several hours on no-man's land at a Gaza-Israel border crossing. Earlier in the day, the cubs were taken from Gaza resident Saed Eldin al-Jamal, who had kept them over a year as pets at his family's home in the border town of Rafah, and transported to the Erez crossing with Israel. By the time they arrived at the border, the Israeli side had closed and the cubs remained on no-man's land after Hamas guards refused to let them back into the Palestinian territory.

But after several hours, Hamas allowed them back in and the cubs' entourage checked into a Gaza hotel, together with the lions in crates, to wait there until the Israeli crossing reopens on Sunday. The Israeli security branch responsible for the crossings said the lions and their entourage showed up out of the blue after the crossing had closed and without any prior coordination and appropriate preparations, unlike in a previous case involving lions. Al-Jamal had bought the cubs when they were a month old from a zoo in the Gaza town of Rafah, after it was hit by Israel last summer.
RELATED TOPICS