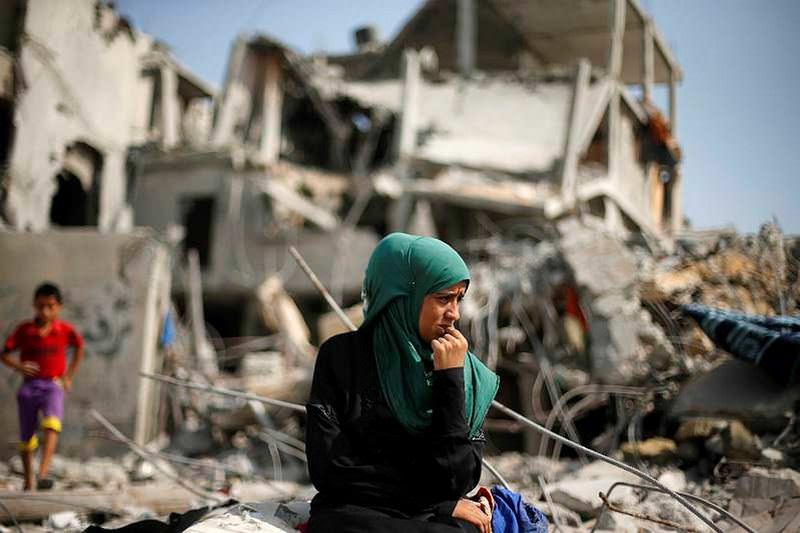 A year after the Israeli attacks on Gaza that left more than 2,000 dead and 100,000 homeless, Gazans are still struggling to survive and continue their lives despite the lack of aid

Over one year after the war in Gaza, tens of thousands Gazans are still homeless and children struggle with trauma and life-long disabilities. "Thousands of homes still have not been rebuilt, forcing residents to construct makeshift homes where they once lived out of prefabricated supplies or rubble. The construction slowdown is due of a variety of reasons, including Israel's strict blockade preventing the shipment of construction materials into the coastal enclave and the failure of promised money to arrive from international donors," AFP reported.

"According to the Gaza Health Ministry, 17,200 houses, 73 mosques and 24 schools were destroyed by Israeli forces in Gaza last year, but the U.N. Relief and Work Agency for Palestine Refugees in the Near East (UNRWA) said that it received financing for only 200 homes in Gaza," New York Times reported. According to a UNICEF report, the 50-day conflict in Gaza last year saw 564 children killed along with 2,956 Palestinians. According to the report by the global children's charity, Save the Children, around 100,000 people in Gaza are still homeless. The report added that 551 children were killed during the Israeli attack and an estimated 1,500 lost their parents. According to the charity, the majority of children, up to 75 percent, show signs of severe emotional distress, including high levels of bed wetting and nightmares. Meanwhile, 89 percent of parents reported that their children suffer consistent feelings of fear and more than 70 percent of children said they worry about another war.

In this context, an independent U.N. commission of inquiry released a report in June on Israel's 2014 Operation Protective Edge finding evidence that Israel committed war crimes during the war in the Gaza Strip in 2014. The report accuses Israel that it potentially breached international law in multiple areas of the conduct of its war, including the precision targeting of residential homes, excessive use of artillery in civilian areas and the loosening of the rules of engagement. The report calls on Israel to provide further details of its targeting decisions. The report accuses both Hamas and Israel of breaches of international law in the way they fought the conflict. The U.N. commission said it gathered "substantial information pointing to serious violations of international humanitarian law and international human rights law" by both sides. The 271-page report says that both Palestinian armed groups and Israel are responsible for violations of international law that could amount to war crimes. The report says there was a huge increase in firepower during the conflict in 2014 with over 6,000 airstrikes carried out by the Israeli Defense Forces (IDF) and about 50,000 tank and artillery shells fired. Palestinian armed groups also reportedly fired 4,881 rockets and 1,753 mostly homemade mortars toward Israel between July and August 2014. The report says that Hamas and Israel are responsible for suspected violations of international law at all levels of the political and military establishments, and must be brought to justice. "There was an explosion about every 10 seconds," the report quoted a witness in Rafah as saying.

Hamas welcomed the U.N. commission's report for highlighting the grave human rights violations of Israel, while Israeli Prime Minister Benjamin Netanyahu denied the claims of that Israel committed war crimes. The report could serve as a road map for the preliminary examination already underway by the International Criminal Court's prosecutor.

Israel still continues its blockade on Gaza, stopping aid flotillas sailing from other countries. The latest, a Freedom Flotilla III vessel, was stopped by Israel and prevented from breaking the blockade imposed on Gaza. The first Gaza Freedom Flotilla expedition in May 2010 ended in tragedy after Israeli commandos killed 10 Turkish nationals, including 19-year-old Furkan Doğan, an American of Turkish origin, in a bloody raid of the Mavi Marmara. The second Gaza Freedom Flotilla took place in 2012. It was forced to turn back.
Last Update: Jul 07, 2015 8:29 pm
RELATED TOPICS