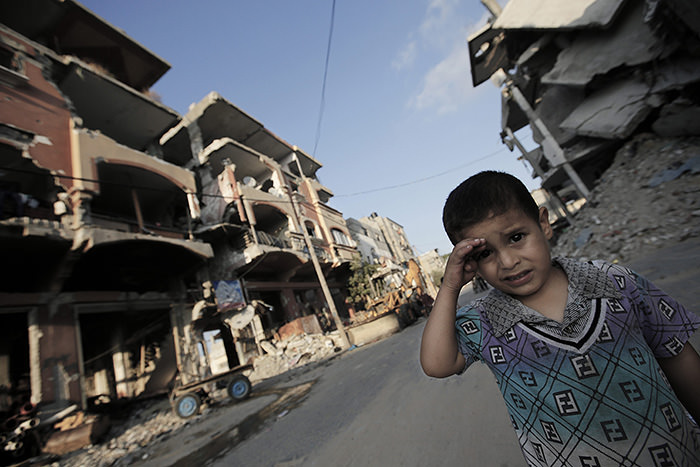 Four-year-old Alaa Al Kafarneh looks on as he plays amid destroyed houses damaged during the 2014 Israel-Gaza conflict, nearly a year later, in Gaza Strip, 03 July 2015 (EPA Photo)
by Mehmet Çelik Jul 09, 2015 12:00 am
It has been a year since Israel launched an offensive military attack against the Gaza Strip, which killed, according to official United Nations figures, 2,104 Palestinians, including 1,462 civilians, of whom 495 were children and 253 women. During the Israeli war on Gaza 69 Israelis, including four civilians, were also killed. Israeli Defense Forces launched the "Operation Protective Edge" on July 8, 2014 and the war continued for 50 days, during which 108,000 people had their homes destroyed or severely damaged as a result of thousands of artillery and tank shells fired into mostly residential areas of Gaza. In addition, public buildings such as schools and hospitals were also among the places attacked by Israeli airstrikes.

The human rights group, Amnesty International has published on their website an interactive map, which provides a mapping of Israeli strikes on the Gaza Strip. The map enables the user to see the time and place of each strike, type of strike, including the number of casualties. The interactive tool also provides photos and other media related views of the strikes.
In addition to lives lost to the war and destruction of the infrastructure, the war has also affected the lives of those left behind.

More than 100,000 Gazans are still homeless, a year after the conflict and the destroyed public buildings have not been reconstructed, including water networks and hospitals, Save the Children has said, according to Reuters.

"Many children in Gaza have now lived through three wars in the past seven years, the last one notable for its brutality. They are emotionally and, in some cases, physically shattered," Save the Children CEO Justin Forsyth said.

Amnesty International (AI) has also published a report saying, "The evidence suggests that the Israeli military had a deliberate policy of targeting family homes. They continued to target homes throughout the war, even after it became clear how many civilians were being killed. Over the 50 days, more than 19,000 homes were destroyed or damaged beyond repair."

"At the height of the conflict, an estimated 485,000 people – 28% of the population – were displaced, including almost 300,000 in 90 UNRWA-operated emergency shelters," United Nations Office for the Coordination of Humanitarian Affairs (UN OCHA) in occupied Palestinian territory, reported.
Last Update: Jul 09, 2015 3:26 pm
RELATED TOPICS