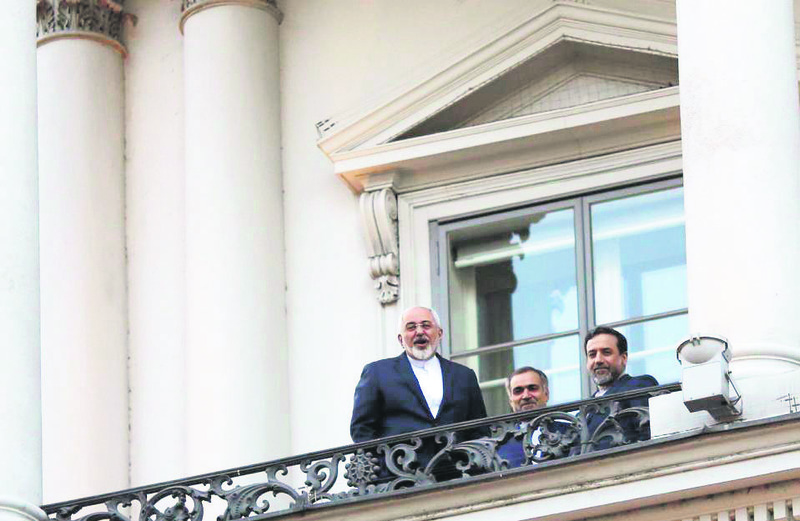 by Associated Press Jul 10, 2015 12:00 am
The Iran nuclear talks turned Friday from talk of progress to a blame game, with Iranian Foreign Minister Mohammad Javad Zarif accusing the United States of shifting its demands. He dismissed a warning that the U.S. is ready to quit the negotiations as counterproductive. Hours after his comments, Zarif met again U.S. Secretary of State John Kerry for another try at resolving differences standing in the way of a landmark deal that offers Iran sanctions relief in exchange for long-term and verifiable curbs on nuclear programs which Tehran could turn to making weapons.

The tougher rhetoric mirrored the frustrations by the sides as the current round of talks entered its 14th day. After blowing past two extensions, negotiators had hoped to wrap up the talks by Friday, but Zarif's comments cast doubts that agreement was near. The sides had hoped to seal a deal before the end of Thursday in Washington in attempts to avoid delays in implementing their promises.

By missing that target, the U.S. and Iran now have to wait for a 60-day congressional review period during which President Barack Obama cannot waive sanctions on Iran. Had they reached a deal by then, the review would have been only 30 days. Iran is unlikely to begin a substantial rollback of its nuclear program until it gets sanctions relief in return.

The talks are formally between Iran and six world powers but have devolved into U.S.-Iranian negotiations over recent months, with diplomats saying the other nations were ready to accept terms agreed to by Tehran and Washington. Zarif's critical comments were thus seen as mostly directed against Washington.

Still, disagreements also have surfaced recently between the U.S. and Russia. Moscow supports Iranian demands for at least a partial lifting of the conventional arms embargo as part of any deal. That's something Washington opposes, and an issue Zarif appeared to touch on in his comments to Iranian state television. Beyond "witnessing a change of stances" from the other side, Zarif noted a "different stand" on some issues among the six nations. "This situation has made the work difficult," he said.

Kerry had warned on Thursday that the Americans were ready to leave, declaring "we can't wait forever for a decision to be made." Zarif, in contrast, said his side was ready to stay and work for a "dignified and balanced deal." Iranians overwhelmingly welcomed the preliminary accord in April that set the stage for the present talks. At the same time, hard liners are keen to exploit anti-American sentiment. On Friday, tens of thousands of Iranians taking part in an annual pro-Palestinian rally marched in Tehran, chanting "Down with America" and "Death to Israel."
Last Update: Jul 10, 2015 8:55 pm
RELATED TOPICS