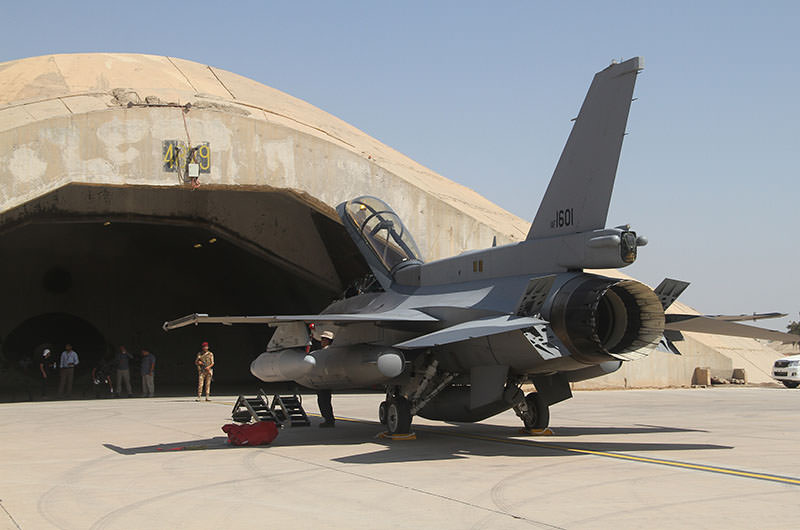 One of four new U.S.- made F-16 fighter jets sits outside a hangar upon their arrival to Balad air base, 75 kilometers (45 miles) north of Baghdad, Iraq, Monday, July 13, 2015 (AP Photo)
by Jul 13, 2015 12:00 am
The Iraqi Air Force has taken delivery of four advanced F-16 fighter jets from the United States, a military official said Monday in Baghdad.

Speaking on condition of anonymity, the official said the planes had been brought to Balad air base north of the capital.

Iraqi authorities have agreed to buy 36 F-16s for their campaign against the self-proclaimed Islamic State of Iraq and al-Sham (ISIS) organization, which controls much of the west and north of the country.

US State Department spokesman John Kirby confirmed that the jets had been delivered and said they would be flown by Iraqi, not US, pilots. He stressed that Iraq purchased the jets for its self defence.

"The fight inside Iraq right now is against [ISIS]. And our expectation is that if and when they start flying missions and combat sorties in Iraq, that's what they'll be used for ... not to contribute to any sectarian issues inside Iraq," Kirby said.

The Iraqi Air Force has backed up offensives carried out by government forces, but is far less capable than a US-led coalition, which has been carrying out repeated air raids against the extremists since August.

The announcement of the delivery of the jets came after officials overnight said troops were starting a large-scale operation to recapture al-Anbar province and the city of Fallujah, 50 kilometres west of Baghdad.

Iraqi authorities have at least twice previously announced the start of operations to recapture al-Anbar, despite continuing advances by ISIS, which in May seized Ramadi, the provincial capital.

Also Monday, the United Nations released casualty figures showing that at least 15,000 people have been killed in Iraq since January 2014.

The UN reported that as many as 3,500 members of the Yezidi religious minority remain in ISIS captivity since the group overran the Sinjar area in August.

The captives are "enduring physical and sexual violence as well as degrading treatment on a daily basis," according to the UN.

"These acts appear to form part of an ongoing policy that aims to suppress, permanently expel or destroy many of these communities within (ISIS) areas of control," the report by the UN Assistance Mission for Iraq (UNAMI) and the Office of the High Commissioner for Human Rights (OHCHR) charged.

In neighboring Syria, a Kurdish militia said that a German commander in its ranks had been killed in combat against ISIS forces near the town of Kobane on the Turkish border.

The People's Protection Units (YPG) said the slain commander, whom dpa is not naming due to privacy concerns, was 23 years old and had joined the YPG three years earlier.

He is the second German to have died fighting in the ranks of the YPG. A 19-year-old German woman was killed fighting ISIS forces in March near the mainly Assyrian Christian town of Tel Tamr in north-eastern Syria.

Two Australians and a British citizen have been killed fighting for the YPG, which is widely seen as the most effective force combating ISIS on the ground in Syria.

An estimated 400 Westerners are fighting alongside the YPG, according to the Britain-based Syrian Observatory for Human Rights.
Last Update: Jul 13, 2015 11:42 pm
RELATED TOPICS