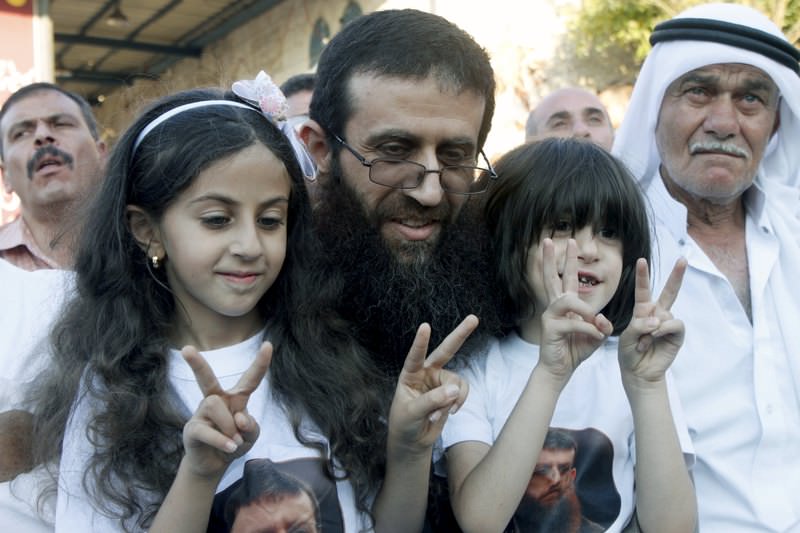 by Jul 13, 2015 12:00 am
Israeli police on Monday rearrested Palestinian Khader Adnan a day after he was freed following a 56-day hunger strike that brought him near death, a police spokeswoman said.

"Khader Adnan was arrested because he had no right to be in the Old City of Jerusalem where free access is allowed to West Bank Palestinians only aged 50 and above, and he is just 37," Luba Samri told AFP.

Samri insisted however it was not an arrest as such but an "inquiry to investigate the offence committed by Khader Adnan".
Micky Rosenfeld, another police spokesman, said Adnan is "an Islamic Jihad activist and is also prohibited for this reason from entering Israeli territory".

Israel considers the Islamic Jihad group a "terrorist" organisation.
Officials with the Palestinian security services said Adnan was arrested while travelling to the Al-Aqsa mosque compound, the third holiest site in Islam, for a special ceremony during the sacred fasting month of Ramadan.

On Sunday, Adnan had been given a hero's welcome in his village near Jenin in the northern West Bank with fireworks, songs and flags flying for Islamic Jihad.

The bespectacled 37-year-old, thin and with a long beard, was released before dawn on Sunday after his jail protest against a controversial procedure allowing indefinite detention without charge.

Adnan had been held for a year under administrative detention, which allows imprisonment without charge for renewable periods of six months indefinitely.

Of the 5,686 Palestinian prisoners currently held by Israel, 379 are detained under the procedure, according to Israeli figures.

His hunger strike, which brought him near death before it concluded last month, had sparked warnings from the Palestinian government that it held Israel responsible for his fate.

Regular protests were organised in his support.

Adnan ended his hunger strike on June 28 after Israel agreed to release him, at which point he was transferred to an Israeli hospital.
Last Update: Jul 13, 2015 11:03 pm
RELATED TOPICS