Nuke deal may turn S. Arabia and Israel into allies 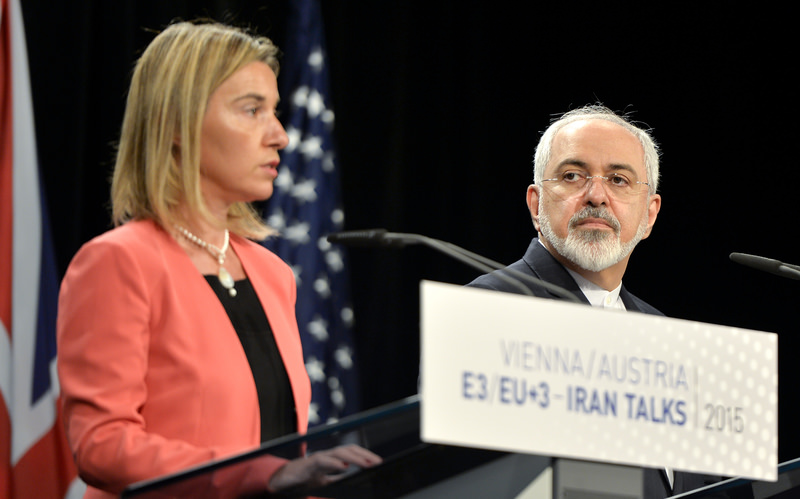 The historic deal, signed by the P5+1 countries with Iran regarding the country's nuclear activities, may lead to a rapprochement between Israel and Saudi Arabia, for which the common ground is the Iranian threat

After more than two weeks of intense and tense negotiations, Iran and the P5+1 reached a final agreement to curb Iran's so-called nuclear program and removing the international sanctions that cost Tehran billions of dollars every year. While Iran and the world powers involved in the negotiations were happy with the result, Israel aggressively called the deal "a historic mistake." The Gulf countries, especially Saudi Arabia, remained silent, but the silence is believed to be a show of displeasure. Considering Iran as the biggest threat in the region may lead to a rapprochement between Israel and Saudi Arabia.

"The accord will keep Iran from producing enough material for an atomic weapon for at least 10 years and impose new provisions for inspections of Iranian facilities, including military sites. And it marks a dramatic break from decades of animosity between the U.S. and Iran, countries that alternatively call each other the "leading state sponsor of terrorism" and the 'the Great Satan,'" AP reported. "Iran agreed to the continuation of a U.N. arms embargo on the country for up to five more years, though it could end earlier if the International Atomic Energy Agency definitively clears Iran of any current work on nuclear weapons. A similar condition was put on U.N. restrictions on the transfer of ballistic missile technology to Tehran, which could last for up to eight more years, according to diplomats. Washington has sought to maintain the ban on Iran importing and exporting weapons, concerned that an Islamic Republic flush with cash from the nuclear deal would expand its military assistance for Syrian President Bashar Assad's government, Yemen's Houthi rebels, the Lebanese militant group Hezbollah," the report said.

"Iranian leaders insisted the embargo had to end as their forces combat regional scourges such as the Islamic State of Iraq and al-Sham (ISIS). And they received some support from China and particularly Russia, which wants to expand military cooperation and arms sales to Tehran, including the long-delayed transfer of S-300 advanced air defense systems, a move long opposed by the U.S. Another significant agreement will allow U.N. inspectors to press for visits to Iranian military sites as part of their monitoring duties, something the country's supreme leader, Ayatollah Ali Khamenei, had long vowed to oppose. However, access isn't guaranteed and could be delayed, a condition that critics of the deal are sure to seize on as possibly giving Tehran time to cover up any illicit activity," AP's report from Vienna said.U.S. President Barack Obama, in an early morning statement , said that "[the deal] is not built on trust, it is built on verification." He said all potential pathways to an Iranian nuclear weapon have been cut off. In Tehran, Iranian President Hassan Rouhani said "a new chapter" has begun in his nation's relations with the world.

Announcing the accord, Federica Mogherini, the EU's foreign policy chief, said diplomats "delivered on what the world was hoping for, a shared commitment to peace and to join our hands to make our world safer." The deal, she said, ensures that Iran's nuclear program "will be exclusively peaceful." In a final negotiating session with his counterparts from the U.S., Britain, China, France, Germany and Russia, Iranian Foreign Minister Mohammad Javad Zarif said, "We are reaching an agreement that is not perfect for anybody, but it is what we could accomplish, and it is an important achievement for all of us." Secretary of State John Kerry, who carried out most of the negotiations, said persistence paid off. "Believe me, had we been willing to settle for a lesser deal we would have finished this negation a long time ago," he told reporters.

Two ardent opponents of Iran, Saudi Arabia and Israel have been disappointed with the deal. Israeli Prime Minister Benjamin Netanyahu said that "Iran will get a jackpot, a cash bonanza of hundreds of billions of dollars, which will enable it to continue to pursue its aggression and terror in the region and in the world." He called the nuclear deal a "historic mistake." "It is impossible to prevent an agreement when the negotiators are willing to make more and more concessions to those who chant 'Death to America' even during the negotiations," he said. Saudi Arabia was relatively calm and has not made any comment as of late Tuesday. However, the oil-rich Gulf country had previously uttered its disappointment with the talks with Iran. Saudi Arabia accuses Iran of backing Shiite Houthi militias in Yemen and Assad government in Syria. Israel also considers Iran and its allies like Assad and Hezbollah as a threat to its national security. A report titled "Iran deal could lead to improved covert Arab-Israel cooperation" published in the Jerusalem Post on Monday, promoted the idea that the two countries would be allying in the recent future, after talking to top-positioned Israeli politicians and academics.

The two countries do not have any diplomatic relation and not recognize each other. But since the start of 2014 in order to discuss the rise of Iran in the region, the two states have held five secret meetings, according to Eli Lake's report for Bloomberg View published last month. "The five bilateral meetings over the last 17 months occurred in India, Italy and the Czech Republic," the report said. The two countries, despite serious problems that date back in history and which are directly related to the Palestinian issue, may go cooperate further to stop Iran's rapid rise and growing presence in the region.
Last Update: Jul 14, 2015 8:19 pm
RELATED TOPICS