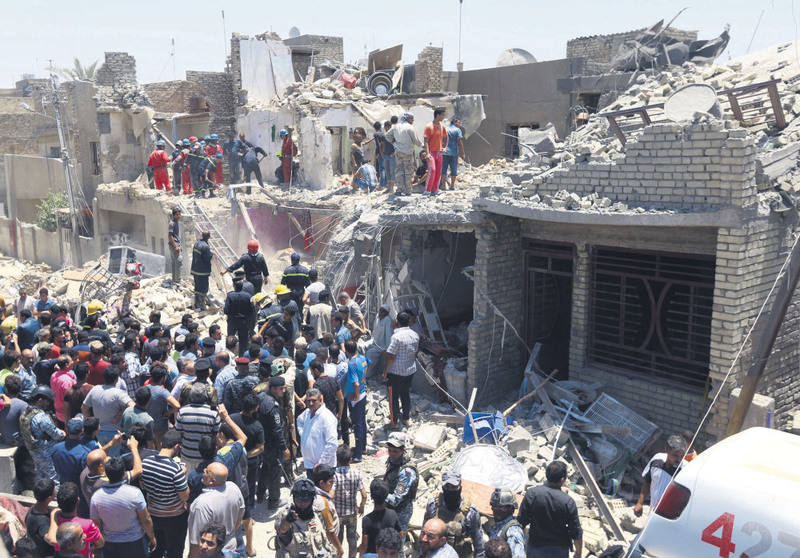 Iraqi security forces search for survivors after a bombing in the eastern neighborhood of New Baghdad, Iraq
by Daily Sabah Jul 14, 2015 12:00 am

A new U.N. report has revealed that 150,000 civilians have been killed in Iraq in the last 16 months and members of ethnic and religious communities in areas under ISIS control continue to be persecuted

A new report released by the United Nations shows that armed conflict has left nearly 15,000 civilians dead and about 30,000 wounded in Iraq during the 16-month period since 2014. The report is based on investigations on the ground and testimonies from victims and witnesses, including internally displaced people, the U.N. said.

The U.N. Assistance Mission for Iraq (UNAMI) report said that members of ethnic and religious communities in areas under Islamic State of Iraq and al-Sham (ISIS) control continue to be persecuted, with around 3,500 Yazidis remaining in ISIS captivity, suffering physical and sexual violence. Some children are taken to ISIS's training camps, taught combat skills and given lessons on ISIS's ideology. According to the UNAMI report, 14,947 Iraqis lost their lives and 29,189 others were wounded between the beginnings of 2014 until the end of April 2015. According to UNAMI and the United Nations Office of the High Commissioner for Human Rights (OHCHR), over the 2.8 million people fled their homes during the 16-month period, including an estimated 1.3 million children. Baghdad was the worst affected city with 1,481 dead and 4,009 wounded.

"UNAMI continues to have grave concerns for the thousands of civilians subjected to human rights violations on a daily basis, particularly by ISIS. Parties in the conflict are required by international human rights law and international humanitarian law to prevent such violations and abuses from taking place and to ensure that civilians are spared to the fullest extent possible from the ongoing violence," said Jan Kubis, the special representative of the United Nations secretary general for Iraq.

"Widespread human rights violations and massive displacement continue unabated throughout the country," said the report, compiled by UNAMI and OHCHR.

The report also documented violations that were committed by the Iraqi Security Forces and affiliated forces, including airstrikes, who may have violated the principles of distinction and proportionality, and the obligation to take all feasible precautions to protect civilians from the effects of attacks.

The U.N. report also devotes an in-depth annex to the June 12, 2014 Camp Speicher incident, during which some 1,700 cadets were killed by ISIS fighters. Drawing on detailed interviews with 12 survivors, it describes how most soldiers were captured at ISIS checkpoints after leaving the camp on the orders of their commanding officers. All parties in Iraq were committing human rights violations, the U.N. report said.

As many as 3,500 Yazidis and members of other ethnic and religious communities remain captives and are subjected to rights abuses by ISIS "Where they are subjected to physical, sexual and other forms of violence and degrading treatment on daily basis."

The U.N. High Commissioner assured that the terrorist acts and human rights violations committed by ISIS militants will not go unpunished and urged the Iraqi government to join the Rome Statute of the International Criminal Court (ICC) and ensure that international crimes defined in that statute are criminalized under domestic law.

Currently, over 3 million Iraqi people are displaced due to armed conflicts between ISIS, Iraqi security forces and others in Iraq, the International Organization for Migration (IOM) said.

Air strikes and ground fighting have continued despite a U.N.-brokered truce between Shiite Houthi rebels and forces loyal to exiled president Hadi. A Saudi-led coalition that in March began launching airstrikes against the rebels has said it isn't bound by the truce because of a lack of commitment by the Houthis.

Rupert Colville, a spokesman for the U.N. human rights office, said in Geneva that at least 142 civilians were killed in Yemen between July 3 and Monday and another 224 were injured. That included a total of 76 deaths and 38 injuries in a pair of airstrikes on markets July 6. The agency added that nearly 1.27 million Yemenis are now displaced within their own country, while more than 51,000 people have fled Yemen for Djibouti, Somalia, Oman, Saudi Arabia and Sudan.
Last Update: Jul 14, 2015 10:14 pm
RELATED TOPICS