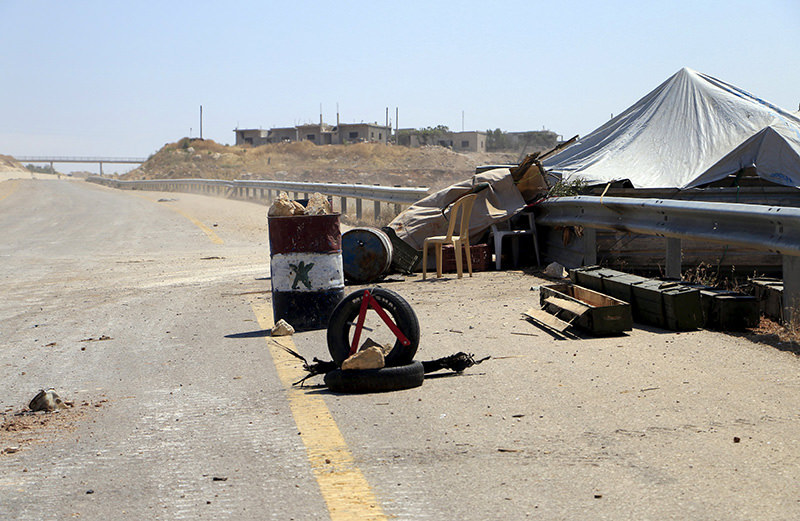 A checkpoint that belonged to Assadu2019s forces is seen after a coalition of rebel groups called Jaish al Fateh said they took control of it, on a highway that connects Aleppo to Latakia, June 6, 2015 (Reuters)
by Daily Sabah Jul 20, 2015 12:00 am
Two people were killed and 15 injured as Syrian regime forces attacked the Avanlı village of the Jabal al-Turkmen Mountain, predominantly inhabited by Syrian Turkmens located in the northwestern Latakia province.

According to Syria Turks Association, tanks, artillery and missiles were used in the attack, and explosions were also heard in villages located on the Turkish side of the border.

Four wounded were brought to hospitals in Turkey's Hatay province for treatment.

The attack is a larger part of the operation as Syrian army announced on Sunday that it had stepped up air strikes and retaken villages in a new offensive on opposition forces in coastal province of Latakia.

Aerial bombardment had intensified over the past 48 hours in a bid to cut rebel supply lines in rugged territory close to Turkey's border, an army source was quoted as saying on state media.

Latakia province - home to Syria's biggest port and a stronghold of President Bashar al Assad's Alawite sect - has been a key battleground of the conflict, which is now in its fifth year.

Sunni Muslim groups, including al Qaeda's Syrian offshoot the Nusra Front, control many villages in the borderlands north of the government-held Mediterranean port city of Latakia and other areas dominated by Alawites, who follow an offshoot of Shi'ite Islam.

The army said five villages and hilltops, including Beit Khadour, Beit Zaifa, Tel alKhadar and Jabal al Rahmaliya, had been wrested back from the insurgents, bringing it closer to the border areas.

The army had stepped up its campaign in the province since insurgents took the strategically located town of Jisr al Shughour in April, strengthening their position in a mountain range that overlooks Alawite villages and close to Qardaha, hometown of the Assad family.

The area has been in control of opposition forces since September 2012. The rough terrain and heavy forests has allowed the opposition forces to resist heavy Syrian army shelling and withstand heavy aerial bombing, defense analysts say.

A Syrian army officer said the aim of the latest operation was to cut rebel supply lines from the Turkish border to the rebel held villages, including the town of Salma, that has been held by Nusra Front since 2012.

"These armed men are weaker than to try to dare get close to Latakia," a senior army officer was quoted as saying in a report from the area by Lebanese Hezbollah's television al-Manar's correspondent.

Last year, the Syrian army wrested back control of the Christian town border town of Kasab, a gateway to Turkey, nearer the coast in Latakia, after less than three months of control by opposition forces, including Nusra Front.

The Syrian war has taken on a starkly sectarian character, with the overwhelmingly Sunni Muslim rebels backed by Sunni Gulf Arab powers fighting to overthrow Assad who is backed by Shi'ite Iran.