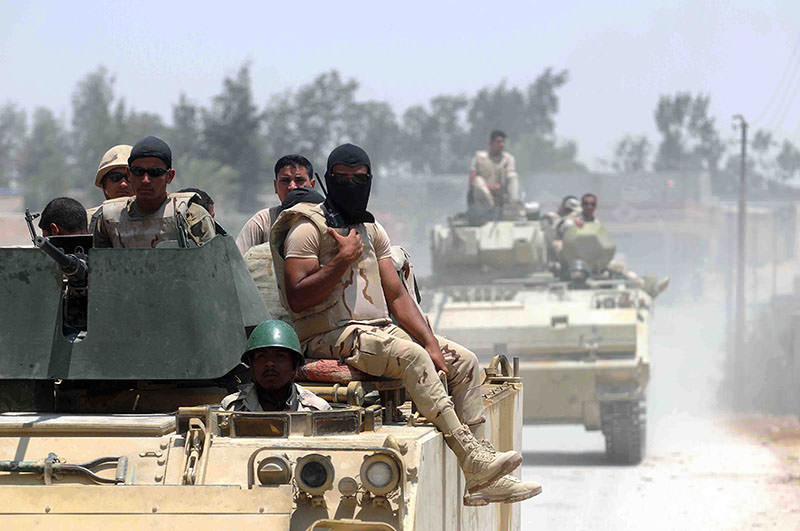 A picture made available 23 July 2015 shows members of the Egyptian armed forces in armored vehicles patrolling a street near the town of Sheikh Zuweid, in the north of Sinai, Egypt, 13 July 2015 (EPA photo)
by Jul 23, 2015 12:00 am
The self-proclaimed Islamic State of Iraq and al-Sham (ISIS)'s Egyptian affiliate claimed responsibility on Thursday for a bombing that the army said killed four soldiers near Rafah, a town on the border with the Gaza Strip.

Egypt is battling an increasingly brazen insurgency in the Sinai Peninsula that has killed hundreds of police officers and soldiers since the army toppled the country's first democratically elected president, Mohamed Morsi, in 2013.

The militant group Sinai Province, which has pledged allegiance to ISIS, said in a statement posted on Twitter that it had planted the bomb on the road between Rafah and the town of Sheikh Zuweid.

Reuters could not independently verify the authenticity of the statement.

The Egyptian military had earlier said in a statement that an army officer and three soldiers were killed in the attack.

Sinai Province last week claimed responsibility for a rocket attack on an Egyptian naval vessel near the coast of Israel and Gaza, less than a week after claiming a bombing in Cairo that heavily damaged the Italian consulate.

The group earlier this month assaulted several military checkpoints in North Sinai, in what was the fiercest fighting in the region in years.