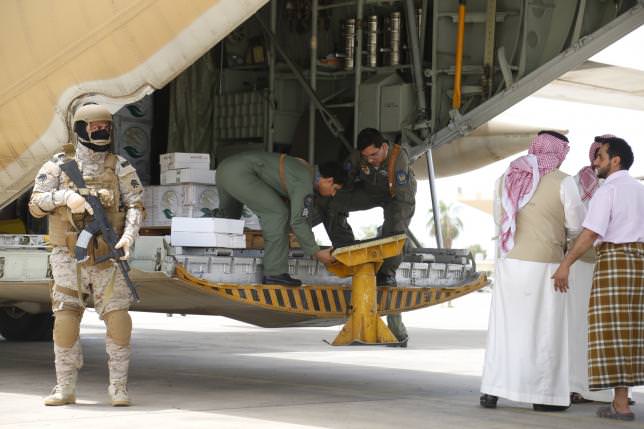 A Saudi-led Arab coalition has been bombing the Houthi militia and army forces loyal to former president Ali Abdullah Saleh since March 26, aiming to push them back from southern and central areas and restore the country's exiled government.

News of the ceasefire came after 80 people were killed in an air strike on the central Yemeni city of Taiz earlier Saturday in which at least 150 were injured.

A week-long U.N.-brokered truce in fighting failed earlier this month after Saudi Arabia said it had not been asked by Hadi, in whose name it is acting, to stop its raids.

A letter by Hadi, who fled to Riyadh, to the King of Saudi Arabia on Friday asked for the ceasefire to allow for humanitarian supplies to be delivered to the war-torn country, the state news agency SPA said.

The latest ceasefire announcement states coalition forces will stop all military activities but reserve the right to respond to violations by the Iran-allied Shi'ite Houthis and pro-Saleh forces.

The humanitarian pause will take effect as of 11:59 p.m. local time for five days, the statement said, to allow for the delivery of humanitarian aid.

A statement by the U.N. special envoy Ismail Ould Cheikh Ahmed said he was on his way to Riyadh for further consultations with president Hadi and other Gulf officials.

The Houthi-controled Saba news agency earlier on Saturday reported the strike on Taiz had killed 55 people but said the casualty figure was expected to rise.

The Saba agency had quoted a local source in Taiz as saying that the bombing early on Saturday morning had targeted the Mokha area inhabited mostly by engineers and workers of a power station and some displaced families.

The frontlines of Yemen's war shifted in favor of the Sunni Muslim Gulf states which support the exiled president earlier this month when, in coordination with forces loyal to Hadi, they managed to drive the Houthis out of the southern port city of Aden and much of the surrounding areas.

Since then warplanes have been landing in Aden airport carrying equipment necessary to help re-open the facility which had been shut down by the fighting.

Aden and the other southern provinces have been largely inaccessible to U.N. food aid, and about 13 million people - more than half the population - are thought to be in dire need of food.

In the Red Sea port city of Hodaida, Saba said a bomb that was planted in an oil tanker on its way to some oil facilities was diffused and an investigation of the incident was ongoing.