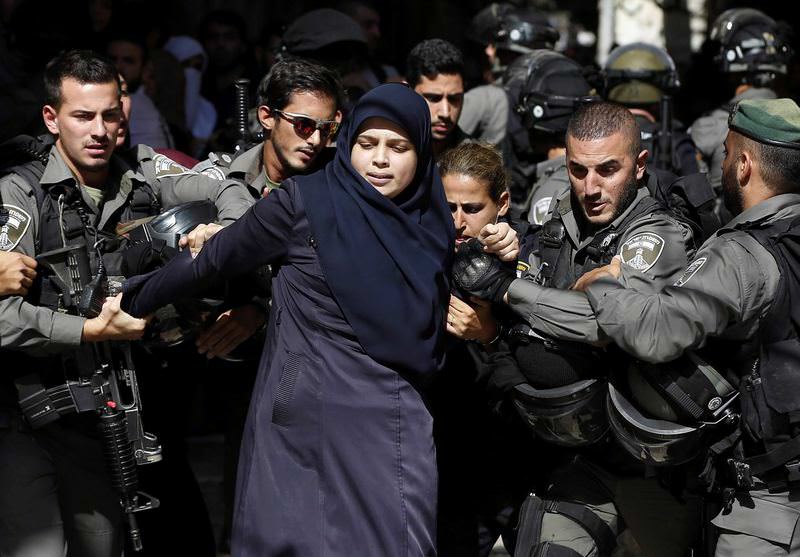 After the raid on Al-Aqsa compound, Israeli soldiers arrested many, including women.
by Cihangir Yıldırım Jul 27, 2015 12:00 am

Israeli police raided the Al-Aqsa compound to allow Jewish worshippers to hold a religious service. After resistance by Palestinians, police arrested many and wounded dozens with bullets, tear gas and concussion grenades

Israeli police stormed Al-Aqsa Mosque during the Jewish holiday Tisha B'Av. Clashes erupted between Palestinian Muslim worshippers and Israelis near the mosque compound in Jerusalem after more than 30 Israelis tried to enter the mosque to mark the Jewish holiday. Eyewitnesses said that police fired concussion grenades heard inside the compound. In response, Palestinians threw stones and fireworks at Israeli police. Also, in the clashes one Israeli officer was wounded, and at least six Palestinians were detained. According to local sources, 25 Palestinians were wounded, including 7 women.

According to Israeli officials, the clashes began when Palestinians started throwing stones. "Masked rioters in the mosque started to throw stones and blocks at police from inside Al-Aqsa Mosque," Israeli officials said in a statement.

Previously, Al-Aqsa Mosque has been attacked several times by Israeli Jews and police. Last March, 132 Jews attacked the mosque with stones. Palestinian women and children were wounded in the attacks. Also, last June 55 Israeli Jews stormed the holy site. Former Israeli Prime Minister Ariel Sharon's visit to Al-Aqsa Mosque was seen as provocative and led to the second intifada in September 2000, sparking a tense conflict between Israel and Palestinians. Last November, Israel ordered the full closure of the Al-Aqsa Mosque compound for the first time in 14 years.

Muslim residents living in East Jerusalem are normally allowed to enter the mosque to pray without restriction. In recent years, especially during clashes, all men under 50 and women under 45 have been banned from entering Al-Aqsa Mosque. Israeli officials said that the restrictions are in place for security reasons. According to Sheikh Azzam al-Khatib, director-general of Muslim Endowments and Al-Aqsa Affairs, over 350,000 Palestinian worshipers attended prayers despite Israeli restrictions during the 27th night of Ramadan, believed to be "Laylat al-Qadr," which according to the Quran, is better than 1,000 months of worship.

Since the Israeli occupation of the West Bank, East Jerusalem and the Gaza Strip in June 1967, the Jordanian government has been running the holy site. The Waqf Ministry of Jordan controls Al-Aqsa Mosque. Only Muslim prayer is allowed in the compound. Guards from the Jordanian Waqf Authority are stationed at the entrance gates for security. The Jordanian-Israeli agreement states that "Israel will give high priority to the historic Jordanian role in these shrines."

Al-Aqsa Mosque is the third holiest site in Islam. Muslims believe that the Prophet Muhammad was transported from Al-Haram Mosue in Mecca to the Al-Aqsa Mosque on a night journey during which he rode on "Buraq." It says the angel Gabriel traveled with the prophet to heaven from Al-Aqsa Mosque. Also, Al-Aqsa Mosque was the first "qibla" – the direction that Muslims turn tow when praying. Then the qibla was relocated to the Kabba in Mecca.

Israeli aggression does not appear only in Jerusalem, but also in the Gaza Strip. During the attacks on Gaza in 2014, more than 2,200 Palestinians including hundreds of civilians, were killed and over 11,000 Palestinians were injured. According to the U.N. and Palestinian officials, 73 Israelis, the vast majority of whom were military personnel, were killed. More than 500,000 Palestinians were displaced in the conflict, the U.N. said. Another finding was that at least 100,000 Gazans became homeless. The Gaza Health Ministry said that 2,310 Palestinians were killed, 70 percent of them civilians. According to the U.N. High Commissioner for Refugees (UNHCR), 65 percent of casualties were civilians. But the Israeli Ministry of Foreign Affairs claims that 2,125 Palestinians were killed, and 36 percent of them were civilians. According to Israeli officials, 44 percent of casualties were militants and 20 percent were males aged 16 to 50. The Palestinian Liberation Organization (PLO) reported that 1,226 Palestinian's under the age of 15 were taken into custody by Israeli forces. According to the PLO, 200 of them are still in prison. The number of arrests of children in Palestine grew 87 percent. Also, Gazan children have long suffered from Israeli attacks on the Gaza Strip. According to a UNICEF report, the 50-day conflict in Gaza last year saw 564 children killed along with 2,956 others. According to the report by the global children's charity, Save the Children, around 100,000 people in Gaza are still homeless. The report added that 551 children were killed during the Israeli attack, and an estimated 1,500 lost their parents. According to the charity, the majority of children, up to 75 percent, show signs of severe emotional distress, including high levels of bedwetting and nightmares. Meanwhile, 89 percent of parents reported that their children suffer consistent feelings of fear and more than 70 percent of children said they worry about another war.
Last Update: Jul 27, 2015 1:15 am
RELATED TOPICS