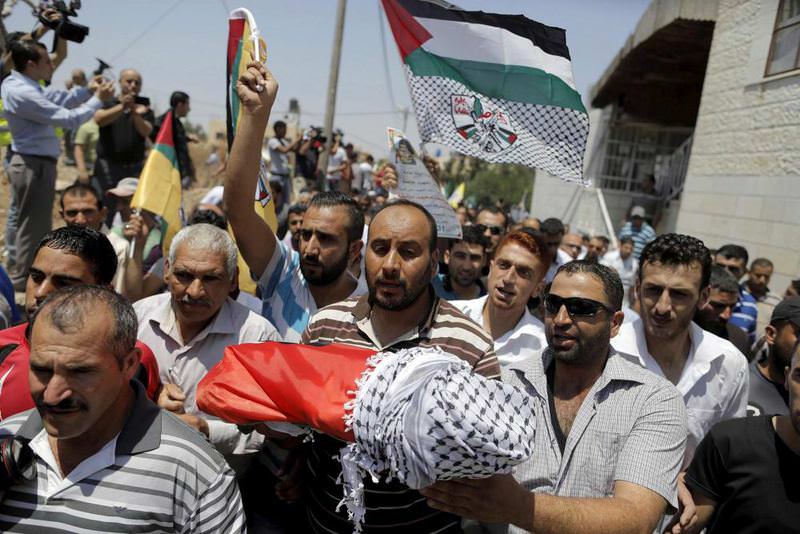 Palestinian mourners carry the body of 18-month-old Ali Dawabsheh who was killed by extremist Jewish settlers.
by Cihangir Yıldırım Aug 02, 2015 12:00 am

Palestinians are on the streets and clashing with Israeli security forces, following the death of a Palestinian toddler in an arson attack by extremist Jewish settlers and raid on Al-Aqsa

The continuing tension between Palestine and Israel is worsening following the death of an 18-month-old Palestinian in an attack by Jewish extremists in a village following a raid on Al-Aqsa Mosque compound and killings in the West Bank. Clashes broke out on Sunday between Palestinian protesters and Israeli security forces near Al-Aqsa Mosque following the deadly arson attack. One Palestinian was shot and wounded and two Israeli police officers were lightly wounded in the clashes.

On July 31, 18-month-old Ali Dawabsheh was killed at dawn after suffering severe burns following an arson attack by Jewish extremists in a village near the northern West Bank city of Nablus. His 4-year-old brother and parents were also wounded. The suspects entered the village of Duma where they set the home ablaze and scrawled graffiti, including "Long live the Messiah," "revenge" and "price tag." The Palestine Liberation Organization (PLO) said Netanyahu's government is "fully responsible" for the death of Dawabsha.

On July 27, Israeli police stormed Al-Aqsa Mosque during the Jewish holiday of Tisha B'Av. Clashes erupted between Palestinian Muslim worshippers and Israelis near the mosque compound in Jerusalem after more than 30 Jewish Israelis tried to enter the mosque to mark the holiday. In the clashes, one Israeli officer and 25 Palestinians were wounded and at least six Palestinians were detained.

On July 26, a Palestinian youth, Muhammed Abu Latifa, 18, was shot by Israeli security forces during an arrest raid at the Qalandiya refugee camp in the West Bank. Also on the same day, among the palpable tensions in the West Bank, the Israeli Defense Forces (IDF) began a mass drill. According to the IDF, the military drill was planned in advance as part of an expansive 2015 training plan aimed at improving soldiers' preparedness in the face of emergency scenarios. Officials said that the drill will focus also on rocket fire from the Gaza Strip.

On July 23, the IDF shot dead Faleh Hamed Zamel Abu Maria, 53, during an arrest mission in the West Bank village of Beit Ummar.

On July 22, Mohammed Ahmed Alauna, 21, was shot and killed by Israeli security forces in the West Bank village of Burkin, located west of Jenin

Al-Aqsa Mosque has been raided several times by Jewish Israelis and police previously. Israeli police closed the gates of occupied East Jerusalem's flashpoint Al-Aqsa Mosque compound following the death of the Palestinian toddler. Muslim residents living in East Jerusalem are normally allowed to enter the mosque to pray without restriction. In recent years, especially during clashes, all men under 50 and women under 45 have been banned from entering. Israeli officials said that the restrictions are in place for security reasons.

Last March, 132 Jewish Israelis attacked the mosque with stones. Palestinian women and children were wounded in the attacks. Last June, 55 Jewish Israelis stormed the holy site. Former Israeli Prime Minister Ariel Sharon's visit to Al-Aqsa Mosque was seen as provocative and led to the second intifada in September 2000, sparking a tense conflict between Israel and Palestinians. Last November, Israel ordered the full closure of the Al-Aqsa Mosque compound for the first time in 14 years.

For Muslims, Al-Aqsa Mosque is the third holiest site after Mecca and Medina.

On July 30, the Knesset passed into law a ruling allowing force feeding of prisoners on hunger strikes, despite opposition from medical associations. According to Peace Now Israel, the Israeli settlement watchdog group, Israel approved 1,065 housing units last week in occupied territories, drawing criticism from the international community. U.N. Secretary-General Ban Ki-moon condemned the announcement of the construction of the new units. Ban urged Israel's government to halt and reverse such decisions "in the interest of peace and a just final status agreement." The U.S. State Department said it was deeply concerned by the new settlement activity and urged "the Israeli government to refrain from unhelpful actions that undercut the possibility of a two-state solution." Germany also criticized Israel for approving the construction of more than 1,000 units in the occupied West Bank, terming the move a threat to the two-state solution.
Last Update: Aug 02, 2015 10:05 pm
RELATED TOPICS