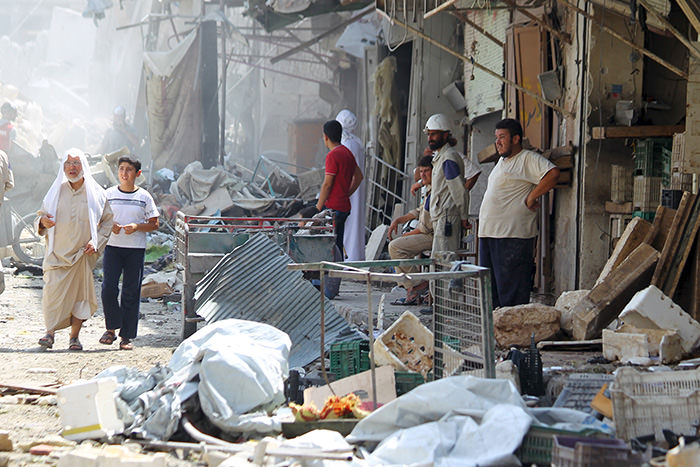 People inspect the damage after a Syrian army fighter jet crashed into a busy marketplace in the rebel-held northwestern town of Ariha August 3, 2015(Reuters Photo)
by Compiled from Wire Services Aug 03, 2015 12:00 am
Thirty-five people were killed on Monday-and scores of others injured-when a Syrian regime warplane crashed into a market in the opposition-held town of Ariha in Syria's northwestern Idlib province, according to a local civil defense official.

Most of the dead were civilians on the ground in the town in Idlib province, which fell to a coalition of Islamist insurgents in May, according to the UK-based Observatory for Human Rights, which tracks violence across Syria.

Scores were also injured, it said. There was no immediate reaction from the Syrian army.

The Local Coordination Committees said the warplane crashed in a busy market in Ariha, adding that it was not immediately clear whether the warplane was shot down.

Rami Abdurrahman, who heads the Britain-based Syrian Observatory for Human Rights, said the warplane crashed in the center of the town, destroying several homes and killing at least 12 people.

The town of Ariha, once a government stronghold, was captured by opposition fighters and ISIS militants in May. The town is in the northwestern province of Idlib, where government forces have suffered setbacks since March, including the loss of the provincial capital, which is also called Idlib.

The Observatory and the Local Coordination Committees said that at the time of the crash, the town was under attack by the air force of embattled Syrian President Bashar Assad.

An amateur video posted online by activists showed several damaged buildings, as well as parts of the plane that crashed. The video appeared genuine and corresponded to other Associated Press reporting of the events.